Hillary vs the GOP 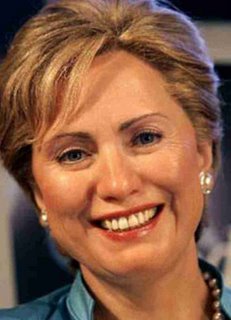 I like Hillary. I am not sure why, perhaps subconsciously she reminds me of my mother. I am a little concerned that if she wins the Democratic nomination, she will not be able to win the election simply because she is a woman. I would vote for her, but I will vote for whoever the Democrats nominate. I am totally repulsed by the Republicans. But I do have to give them, or at least Karl Rove, credit for being able to seek out the lowest common denominator and get their candidate elected, or close enough that they could steal the election. I mean if a large part of the country hadn't been sold on George W. Bush, the piddling few thousand votes that they ended up squabbling over would not have made any difference.

I am really surprised to see Barack Obama even running as a candidate. I am glad he is. It shows this country has made some progress. He would not be able to win the election. Our country is still too racist for that.

Those are the only two candidates that have made any impression on me. I try to avoid the news, but I subscribe to the paper and I see the headlines in passing on my way to the comics, and I the see the television news in passing while I am flipping channels on my way to the next crime drama. Occasionally I will read something in a news magazine while I am waiting in a doctors office. So I am wondering what I am picking up on that causes me to notice these two? I suppose the novelty of someone who is not a white male is "newsworthy", so they are reported on more than the other candidates.

When I was in school my teachers used to exhort us to look into the issues, study up, read. And I used to try to do that. But I found that the more I read and studied, the murkier the issues got. So now I just pretty much go with whatever the Democrats are promoting. Their beliefs, such as they are, seem to align more with my ideals than the naked greed I see on the Republican side.

Email ThisBlogThis!Share to TwitterShare to FacebookShare to Pinterest
Labels: Politics