The Witches Hat Shape of Politics 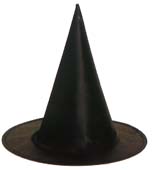 Politics is a funny game. It is sometimes very easy to get people stirred up about one issue or another. Ann Coulter is a prime example. Most anybody who has heard of her has a very strong opinion one way or another. Most liberals despise her and most conservatives adore her. I think she should be shot. If she knew how much she was able to enrage me, she would no doubt be very happy about it. She thrives on polarizing the electorate and she is very good at it.

A witches hat is shaped like a sharp cone that comes to a point at the top and is surrounded by a broad flat brim. The political landscape is shaped very much like this hat. At the peak are those who are currently in power, the president, the chairmen of the political parties, speaker of the house, etc. Below them are the senators and congressman, their aides, their supporters, political pundits, reporters and media moguls. The brim is the electorate. Most people do not follow politics too closely, there might be one or two issues that are important to them, but for the most part politics is too remote from their everyday existence to make much difference. They are bombarded with media messages everyday. Those that agree with their feelings make some impact, those they don't care about get ignored, and those they disagree with will bestir some animosity. People who are more concerned about political issues are closer to the center. People with less concern are further away. Notice that the farther from the center you get, the bigger the area the brim covers. All the advertising in the world will not reach the people at the edge. They just do not care and will not bother to vote.

So it is pointless for me to hate Ann Coulter. She is one of the GOP's most effective media stars, and they will keep using her as long as she can effectively stir the electorate. We were talking at lunch today and I mentioned that Ken Starr's prosecution of Bill Clinton had been a complete waste of everyone's time and money. Elliot disagreed. He thought that the Ken Starr show trial had influenced the electorate enough to enable the Republicans to win the next presidential election.

It is not enough to be right, or better, you have to create the illusion that you are right and better, and if you can create that illusion in the minds of the voters, it does not matter if you are right or better or not.

Email ThisBlogThis!Share to TwitterShare to FacebookShare to Pinterest
Labels: Politics