I remember hearing speculation some time ago that the Chinese were going to adjust the value of their currency as they were holding it to an artificially low level. Some people thought it would be a good idea if the Chinese let their currency float, like all other major currencies in the world. In any case, it seems like I heard this only a few months ago, and I never heard that anything had changed. Now from Robot Wisdom Auxiliary I find this graph which shows that the Chinese currency has been floating for the last two years, and the dollar has been steadily decreasing in value ever since. 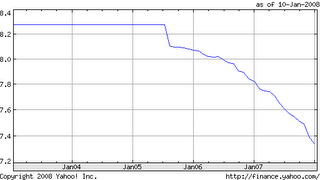 I guess I can't stay on top of everything, but I think someone should have told me. Note that graph has been clipped. The scale on the left hand edge of the graph indicates that the dollar has only dropped about 12% of it's value, not 90% that you might surmise from just looking at the shape of the graph. Stupid publicists, always trying to get the most out of a story, even if it means misrepresenting the facts.

Email ThisBlogThis!Share to TwitterShare to FacebookShare to Pinterest
Labels: Economics

I think they're calling it a "crawling peg" -- which means they're letting it float, not by too much, too quickly. I've seen estimates that the yuan is undevalued by 40% or more. Even so, 12% over 30 months is nothing to sneeze at -- over the same period it looks like you would have done better buying yuan than the S&P 500.