Okay, I am officially impressed. My wife ran/walked in the Portland Marathon a week ago last Sunday and managed to complete it in a respectable time. This is after having been home sick with pneumonia the previous week. I frankly did not think she would be able to finish it, but evidently she's a pretty tough cookie. 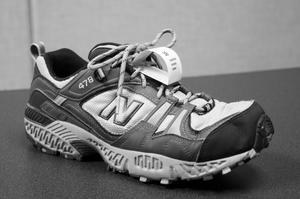 Have you ever seen the start of one of these big races? Each participant has some kind of doo-dad attached to one of their shoes. (This one is cardboard with some kind of electronic circuit embedded in it.) There is a big, wide rubber mat stretched across the starting line. As each person goes across the starting line there is a chirp. When starting a big race and there are a mass of people crossing the line simultaneously, the individual chirps blend into a continual buzz, kind of like a large flock of bird all squawking the same squawk. 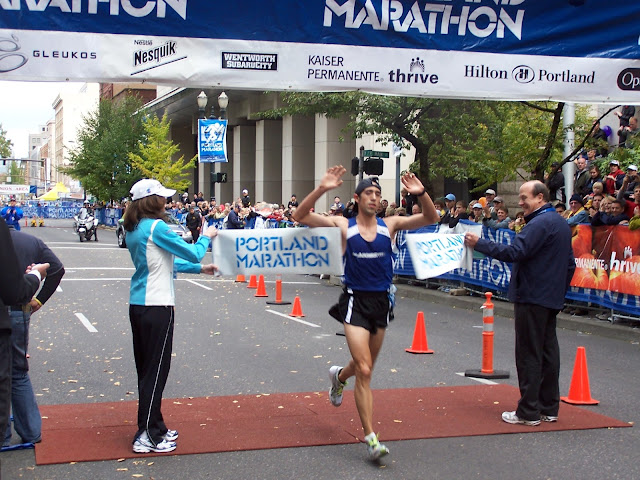 This picture is from 2007. You can see the detector lying on the ground under the runner with cables coming out of the left hand end. Evidently there were more of these doo-dad detectors at work at several places along the course because there is a web site where you could check an individual's progress, or even several people simultaneously.

Shortly after the race was over, pictures of the race were available on the web. You enter your bib number (your racing identification number), and the web site puts up the photos closest to the time you were near the various photographers. They put up a row of photos for each photography station and you can scroll left or right, one second at a time, to try and locate your picture. Somebody put a lot of effort into organizing the photo shoot of this race and in putting together the computer software that got this information up on the web in a timely manner. I'm impressed.

We looked for photos of Anne Saturday night and we were able to find eleven pictures of her. In some cases her photo showed up immediately, sometimes we would have to scroll a few pictures one way or the other. There was only one station out of three or four that didn't have pictures of her, and she remembers seeing a photographer at that point fiddling with his camera and not taking pictures.

There were a bunch of pictures of the start of the race, but there were so many people in the pictures and the pictures were so small (thumbnails on the web) that it was a little hard to tell if you were in them or not. Even if you had a large format picture of these scenes, I think you would still need a red circle and arrow to point out the person of interest.

At each station along the route and at the finish line Anne was captured in several pictures. Naturally not all of them were great and wonderful, but several were pretty decent. Of course, they are willing to sell you copies. You could just capture the thumbnails from the screen, but they are pretty small, grainy, and have advertising graphics impinging on them. The prices aren't cheap, but they are reasonable, considering I didn't have to be there to take them. Besides, I would not have been able to make it to all the various stations in time to take the photos.

You can get the photos printed in a variety of sizes, download them, or buy a CD. This causes some consternation. Which would be best? Printed photos are nice. You can hand them around to your friends and coworkers. You can pin them on the wall. A CD would be nice. You could put it in a box and know that your precious memories were safe. The way I work now, and the way things are going, downloaded might just be best. I could post them on my blog, as long as my wife didn't find out. She is kind of particular about that kind of thing. I could upload them to Picasa, where they would be safe forever. Right? They would be safe there forever, wouldn't they?

Update October 2016 opened to fix problem of text overlapping photos. Editor view looks fine. Try preview, preview won't load. Now I have a warning about an html problem, click on fix, and it is apparently fixed, unlike the previous trip down this road which resulted in the photos disappearing.

Posted by Chuck Pergiel at 9:45 AM