So I'm trying to get the audio working on my Linux box. I spent some time futzing with it and eventually concluded I need some basic benchmarks, like do the speakers work? Can I make any audio work? Maybe I should just go out and buy a sound card. Whoa! Let's not be drastic here. Shoot, a sound card is going to set you back, what, a dollar? Maybe even a dollar and a half!

I've got another computer sitting here that I was supposed to sell, but somehow I have not gotten around to it. Let's just hook that up and see where we go. Right off the bat we have a problem. The dag-nab PS-2 keyboard connector won't plug in. The mouse connector works fine, it even plugs into the keyboard socket. What gives? Close comparison of the two plugs and sockets reveals that the plastic tab in the center of the keyboard connector is looking a little beat, and look here, in the corresponding slot in socket, there appears to be a piece of metal impinging on the slot. But when I try and plug it in, it feels like it is jammed up around the metal shell. Try another keyboard, it plugs right in. What the devil? Oh, look, the center plastic tab is missing. Now who would have done that? Not me, I would have remembered such a thing. Oh, yeah, I guess I did do that. Okay, same cure here. Use a pocket knife to bend the plastic tab over until it breaks off and falls out. Good, step zero complete.

So now I connect it up and turn it on and ... and nothing. It sits there and hums at me. No video at all, not even any BIOS sign on message. This isn't good, and then I remember! This was going to be my multi-media machine, my personal DVR, until I couldn't get decent video out of it. But while I was fooling around with this thing, I got to the point where I was using only the TV for video. I did not have a computer monitor hooked up to it. Now I have a monitor, but no TV. Hmmmm. Ought to be some way to convince the BIOS to revert to using the standard computer video instead of this TV card. I try pulling the TV card, no help. So I go out on the internet. I haven't found a solution yet, but I did find this: 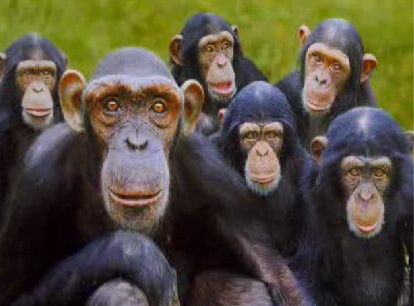 We've all heard that a million monkeys banging on a million typewriters will eventually reproduce the entire works of Shakespeare. Now, thanks to the Internet, we know this is not true.

Posted by Chuck Pergiel at 3:57 PM