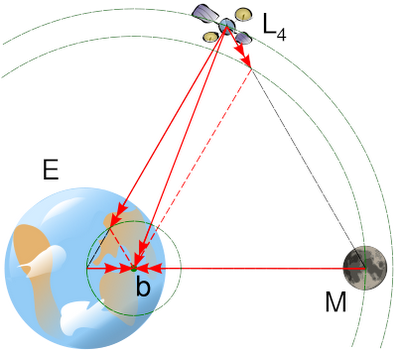 Eventually we are going to get serious about exploring the solar system. When we reach that stage it would be handy to have a real space habitat in place at either of the Lagrange points L4 or L5. These two points follow the same orbit as the moon, either leading by 60 degrees (L4) or trailing by 60 degrees (L5).

A large sphere, or a collection of large spheres might be the simplest way to construct such a habitat. These spheres might be as small as a hundred feet in diameter or as large as a mile in diameter. A sphere would be easiest because of the internal air pressure. Trying to contain a large volume of air with any other shape is going to put additional strain on the structure.

How could we construct such large spheres? We could construct them of a multitude of small pieces, each one specially shaped. We could fabricate these sections on the moon and boost them into orbit where space suited workers could rivet, weld, or otherwise bond them together. That is imaginable, but it would entail a great deal of very precise work and would likely take years to complete.

On the other hand, I have been wondering if it might not be possible to blow a giant bubble, much like glass blowers blow glass. We are working in an area of virtually no gravity, so we should not have a problem with the weight of the structure causing it to collapse. You would still have the problem of boosting enough material out to the chosen Lagrange point. And now you would also have the problem of generating enough heat to melt the entire mass of material, and keep it molten while it was "blown up" into a sphere.

In space we would be loosing a great deal of heat. We could build a large insulating structure to house our metal bubble inflation, but that is exactly what we are trying to avoid. Build a temporary insulating structure may be easier that building solid metal sphere designed for habitation, but it would still be a big job.

If we were closer to the sun we would not loose so much heat energy, in fact if were close enough, we might even be able to use the sun to melt our material. Matter of fact, how is this for a hare-brained idea? Take one correctly size iron-nickel asteroid. Bore a hole to the center. Carve out a cavity of some hundreds of cubic yards. Fill the cavity with water/ice. Seal the hole so the water cannot escape. Push the asteroid into an orbit that will cause if to pass very close to the sun before coming back out to Earth's orbit. As the asteroid approaches the sun it will start gettting warm. The water in the center will eventually become hot. The asteroid will eventually become molten, the water will turn to steam and inflate the asteroid to a useful diameter. The asteroid's orbit will cause it recede from the sun and cool. Eventually it will return to Earth's orbit where it will need to be met by a booster to stabilize its' orbit.

It would not be easy to implement, and it would no doubt take a number of trials before we arrived at a lucky combination of events that would deliver a usable sphere. Challenges we would face:
Just think though: what a sphere it would be!

Drawback : The mass of water needed is proportional to the bubble volume( R cubed).

The mass of a shell lofted there and assembled is proportional to the surface area ( R squared).