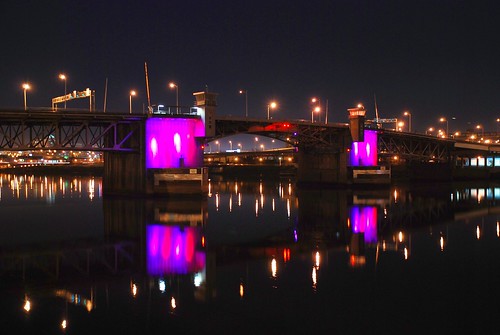 I have been out of work for almost two years now. I spent a good deal of that time on a conventional job search. I had a number of interviews and most of them went pretty well, but I did not land a job. There could be any number of reasons for it, but I suspect the biggest one is my low tolerance for B.S. See the letter from Anytown, USA, for a similar story.

So this year I decided to try and change my stripes. I would go out and talk to people. I might just find something interesting and useful to do.

To that end, I started looking for public meetings of small groups that I could attend. My first idea was the local Chamber of Commerce, but as I looked around I discovered more groups, more events and more calendars. Some of the meetings have been more interesting than others, some have had good speakers, some, not so good. But they have all been very instructive.

Yesterday evening I went to two events in downtown Portland. One was a presentation by the Portland City Club at Jimmy Mak's, a jazz nightclub on the West side. The other was an obscure computer programming gang at CubeSpace, a community office space on the East side.

I took the train to downtown Portland, and then I walked. Walking from Jimmy's to CubeSpace took me across the Morrison Bridge, and that was the adventure.

Portland is bisected North and South by the Willamette River. There are eleven bridges across the Willamette in Portland. This Google Satellite View shows the eight centrally located ones. This picture shows the same eight plus the two at the Northern extreme: the Burlington Northern Railroad Bridge (no auto traffic) and the St. Johns bridge.

My trek across the river took me across the Morrison bridge. Note the splay of on-ramps at the West End and the cloverleaf tangle on the East end. This made just getting on the bridge a bit of a challenge. Atul666 has a long story all about pedestrian access to the Morrison bridge, along with some good photos.

Getting off the bridge was not as difficult as there was only one way to go, but it was more, er, shall we say, interesting? I would say scary, but I'm a man and men don't get skeered. The red marks indicate pedestrian access on the North side of the bridge, the blue ones indicate access on the South side. 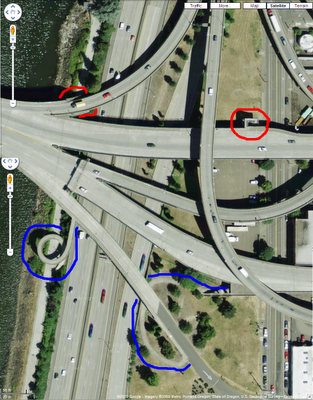 I took the North side route as it was handier, and I wasn't aware of what was waiting for me on the East end. When I got to the East end of the bridge, the sidewalk veers off to the side and down a flight of stairs. Pitch black going down the stairs. Then there is a catwalk underneath the roadway. There is a big pile of stuff lying on the catwalk. As I approach, it moves and I realize there is someone sleeping here. I walk by, then up the stairs on the other side of the roadway and back to the sidewalk. After I got off the bridge (down the stairs in the red circle) I proceeded Eastwards, still under the bridge where I came across several other people camped out for the night. Half a block farther on there were people eating and drinking in a pretty nice looking restaurant.

Coming back I jogged across the on ramp to avoid the black stairs and the sleeping person. Skeered, polite, or lazy? Your choice. I did not see anyone while I was crossing the bridge the first time. I did see one other person Eastbound on the South side when I was returning.