I don't like to pick on Sun Microsystems. They are not a giant evil corporation like Microsoft. They are relatively small company that has tried to make a go of it by doing the right thing. Okay, that may be a bit much. They did come up with Java, which Microsoft attempted to hijack, and they are supporting Open Source, so they are generally okay in my book.

I got a notice on my Windows XP system that there was a Java Update available, and there didn't seem to be any way of getting rid of it. You could delay the installation for a couple of days, but this stupid update program is going to keep coming back until you let it install it's stupid update. I don't need this update, I didn't ask for it, and I don't want it, but there doesn't seem to be an easy way to get rid of it. Fine, go ahead and burn a couple of minutes of my time you stupid program. At least you will stop bugging me. Grumble, grumble, grumble.

I don't really know if I need the update or not. My computer works fine, well, good enough. I see no reason to go messing with it. There is a possibility that there is some obscure bug that this update will fix, and I will only notice it because some occasional glitch in my web surfing will go away.

More likely, it is going to add some annoying new feature, like these dad burn fly-over popups. There will be some magic links in a bit of text on your screen, and if you move your mouse over them, accidentally or on purpose, this little window will pop up "tellin' me more and more about some useless information supposed to fire my imagination", and blocking my view of the text, and it won't even have a close button on it, you just have to wait for it to time out. Whoever first started using this particular device for advertising should be taken out behind the barn and shot. Dad burned whipper-snappers.

So I've been watching the update process and these splash screens look a little ragged, especially this last one. Are they using JPEG's for high contrast text? Idiots. It looks like s**t. Maybe it's just my old, low resolution screen (1280 x 1024). Maybe I'm not part of their target demographic. Maybe they shouldn't be cramming this update down... now, now, we've already been over that. So why do they put this up? I haven't seen a more wretched display of text since Windows 3.0 initial splash screen. I mean just look at this thing: 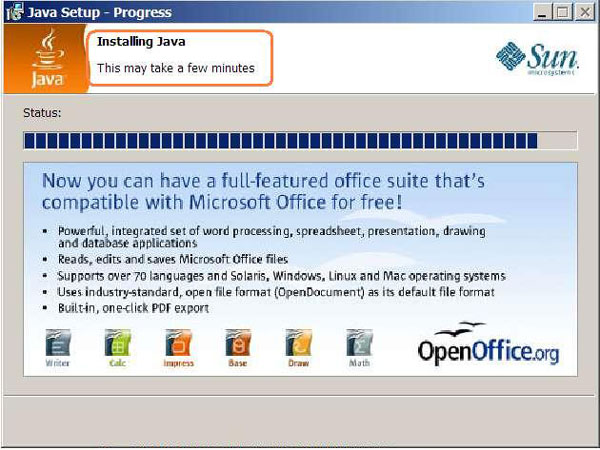 Because Sun is not Microsoft, and any enemy of my enemy is, at least temporarily, a friend of mine, I thought I would drop them a note. So I try to sign up for their web forum, and this is what I get:

Email ThisBlogThis!Share to TwitterShare to FacebookShare to Pinterest
Labels: Computer