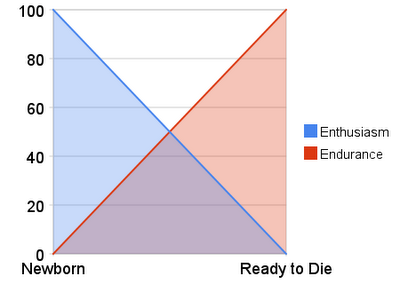 Newborns are full of enthusiasm, but they have no endurance. They wake up long enough to eat (drink) and then they fall asleep. As people age they start to lose some of that enthusiasm, but they are able to put up with more delay, problems, difficulties, etc. Eventually as you get older you lose all your enthusiasm. At that point all you can do is endure. If you have lost all of your zest for living, if you cannot muster any enthusiasm for anything, you may as well turn out the lights.

I heard (read?) a story one time about some guys on a ship that sank out from under them. I think it was in the North Atlantic, but it could have been farther South. The Northern Atlantic is too cold for anyone to survive very long in the water (see "Titanic"). It may have been during WWII, but then again, maybe not. Does not really matter to the story. Anyway, these guys were on a ship, the ship sinks, they don't have any lifeboats, so they are in the water just trying to stay afloat. They had gotten a message off before they went down, so another ship might be coming to their rescue. Might be. Might take a while. So there they are a dozen or twenty guys floating in the water, waiting. They are there for a while. Hours pass. People start dropping off, they just give up, or get worn out, can't stay afloat any longer, slip beneath the waves and drown. Hours pass. More people disappear. Eventually after some infinitely long period of time a ship appears and pulls the survivors from the sea. The ones who are left are the old guys. All the young guys gave up and drowned.

That's my story about enthusiasm and endurance.

Then there was a comment made by Lucky Jack Aubrey (from Patrick O'Brian's series of sea stories) disparaging enthusiasms in general. He was referring what we now call fads. I looked for the quote, but I could not find it.

So, if endurance is left (after the wane of enthusiasm), perhaps one shouldn't assume one might as well turn the lights out.

Endure, and see what happens next..and/or whatever is to be learned from some good steady time-consuming endurance. Seems a shame to cut short endurance. Perhaps that's the message of the story..or did the old guys get enthusiastic in the cold water also?

Maybe the act of endurance is a process that shouldn't be cut short. Could eventually lead to enthusiasm again, like the men in the water. or some other redemptive state of mind...??