How many Pergiel's does it take to change a light bulb? 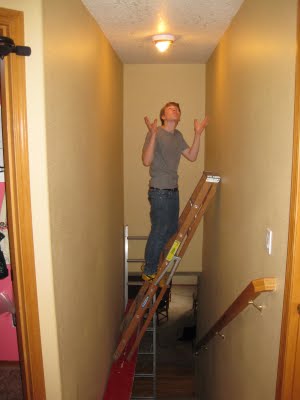 Only one, but he has to be motivated. When we had this house built, the builder gave us the option of having the ceiling over the stairs be a flat continuation of the ceiling over the upstairs hall, or it could be at an angle maintaining a constant height over the stairs. I had visions of a slanted ceiling interfering with the moving of large pieces of furniture, so I opted for the flat ceiling. But now every time that the hall light burns out we have an exercise in scaffold building. My friend Glenn actually came up with the solution which starts with a small extension ladder (silver) sitting on the stairs and leaning against the far wall. Then we put a plank (red) from about the fourth step down from the top over to the extension ladder. Lastly is the (wooden) step ladder resting on the plank and wedged between the two walls. It feels a little precarious, but it works well enough.

Suggestion : use one of those long-life non-incandescent bulbs :-)

I am not especially keen on compact flourescent bulbs. They take a while to reach their full brightness after they have been turned on, and then there is the issue of mercury. It's okay to throw four foot bulbs in your trash, but not eight foot bulbs?
An LED light would be great, but they are still kind of expensive, and besides, a little scaffolding construction is a good experience.