All in all my time with the airlines was not too bad. There were a couple of incidents that might be worth relating. The first was when we were trying to take off from Minneapolis-St. Paul on our way to Columbus. There was a lady sitting in the row behind me who had a small dog in some kind of bag. The flight attendant spent 15 minutes trying to ascertain whether it was okay for her to have the dog with her or not. We are sitting on the runway, all buttoned up, we have taxied away from the terminal and now we are sitting on the tarmac while this flight attendant goes through these shenanigans.

I am thinking there is something wrong with this picture, but I can't quite figure it out. TSA evidently let her dog through security, and I can see that, it's not like he is going to explode, at least not with deadly force. I suppose if it was a trained killer (!?) it could be used like a knife (take this plane to Miami or Fifi will bite your nose off!). And the woman sounded like the grandmotherly type, but the ones who look the least suspicious are the ones you have to watch.

Anyway, it all boiled down to whether the lady had a receipt showing she had paid the $100 to allow her to take the dog on the plane. She's digging around looking for this magically slip of paper and I'm thinking this is nuts. The plane probably burned $100 worth of fuel just sitting on the ramp waiting for this to be resolved. Me thinks the flight attendant had too much coffee.

On another note, I saw this sign on a door in a terminal somewhere: 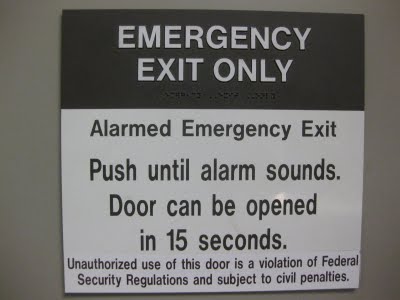 I don't quite know what to make of this. Somehow I don't think it's a good idea, but hey, the TSA knows what is best for us, right?

They confiscated my pocket knife in Columbus. It was old, and raggedy, but still useful, and it was mine. I could have gone back and mailed it (for $12) or checked it as luggage (!?). Could I check a knife all by itself? And if I could, would I have had to pay the $15 fee for a checked bag? I knew I had a new one sitting at home, so I let them keep it.

I put it in my suit case for the flight to Ohio, but coming back I forgot about it until it was too late. I wonder what they do with all the stuff they confiscate? I left a set of keys at security once when I was seeing my kids off. When I came back through a few minutes later, the guard opened up a drawer with a zillion keys in it. So I imagine they confiscate a lot of stuff.

Then there was the loud flight attendant. She is giving us the standard safety spiel at the beginning of the flight and she is REALLY loud. I have to plug my ears with my fingers until she is done. I see her walking down the aisle later on, handing out peanuts or some such, and the nitwit is wearing bright yellow, foam earplugs! Some people.

Email ThisBlogThis!Share to TwitterShare to FacebookShare to Pinterest
Labels: Travel