I finally got around to replacing the burned out light bulb in the pump room the other day. It's been on my list for a while, but for some reason I had been avoiding it. Perhaps I was saving it for a really bad day and I needed something really easy to do so I could feel like I had accomplished something. Anyway, I had several similar tiny chores that had accumulated and I finally set about them.

After I replace the light bulb, I thought I better check the water level in the sumps. Oh. This is not good. Looks like both sump pumps quit working and crawlspace has two or three inches of water in it. So I go to Home Depot and get a new one. $90. I could have sworn the last time I bought one if was $70. Course that was probably ten years ago, and we do have constant inflation. I wish there was something constant we could peg value to, then we would have something to compare prices with. But that's another topic for another day.

This morning I finally buckle down and pull out the old sump and get ready to connect the new pump and the old adaptor won't fit. They have changed the size of the port. Bah, and a few other choice words. Back to Home Depot to get the proper sized adaptor.

I am on my way home heading North on 10th Street, which is kind of a main drag, crowded with people going shopping. Two lanes widens into three and I am in the center of these three lanes. Up ahead at the light the left lane must turn left, the right lane goes straight, and the center lane can go either way. The guy in front of me evidently doesn't realize this because he squeezes his way into the left lane. This leaves a half a block of open space in front of me up to the light, so I romp on the gas.

I don't know how fast I was going when I went into the corner, 15, maybe 20 MPH, but the tires start squealing. This has happened before, and I have attributed it to it just being a truck, or maybe it's just the cheap tires. But it's never been this loud or this sustained. Matter of fact it doesn't stop and the rear end of the truck slides around until I am durn near crosswise in the street. Surprised me and everyone else in the vicinity, I imagine. 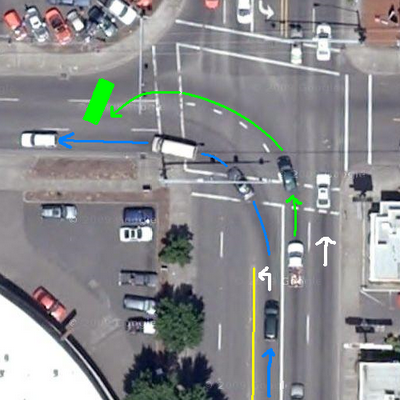 Fortunately I didn't hit anything, and I was able to drive on without causing more than a hesitation in traffic. I am really baffled as to why this happened. I mean, for Pete's sake, it was dry today. It's been raining all winter, the streets have been wet, and I haven't had any problem. Why should the tires suddenly lose traction on a sunny day?

I suppose the tires could be low on air, but I just checked, they are fine: 20 PSI. You might think this is a little low, but these are big fat tires on the rear of a pick up truck that runs around empty most of the time. 35 PSI is way too high. Even 25 PSI causes them to wear in the center. But maybe that's why I'm not getting the traction I think I should. And maybe I didn't hear them squealing in the rain because they just slid. Naw, I think I would have noticed that.

In the picture the Blue lines are Northbound traffic turning left. Yellow line is divider between North and Southbound lanes. Green line is path I followed. Bright green rectangle is location my truck ended up.

Or maybe years of driving has given me confidence to go closer to the limit, and sometimes I go a just a little too far.

Meanwhile I have one sump pump working. Now I have to go look at the other one.