The first part was very clear when I woke up, but is much hazier now:

I was talking to several other guys about repairing an automatic transmission. We needed some kind of fancy valve, we didn't have one, couldn't get one and we were trying to figure out how we could possibly adapt some other piece of equipment to use instead. 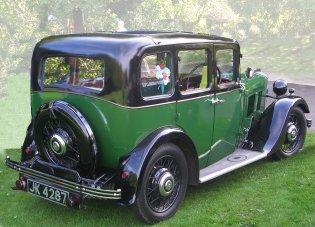 I am walking across the yard from the back of the house to the garage. It's an old farm type arrangement. The yard is dirt and gravel. I am talking to someone about the repair we are trying to effect. An old black car drives up to the back of the house. It's like from the 30's or 40's. It's a sedan with no trunk. We are back at the garage when the driver comes up. He's about four feet tall, a bit wide and a little on the ugly side. He asks us if we know where a fella can get somethin' ta eat. I ask him if he knows how to cook. He answers in the affirmative and I direct him back to the house and its kitchen.

The picture is not exactly right. In my dream the car was all black, and dusty. It was at least a decade newer than this one, but the angle of roof and the back of the cabin are about right.

Email ThisBlogThis!Share to TwitterShare to FacebookShare to Pinterest
Labels: Dreams