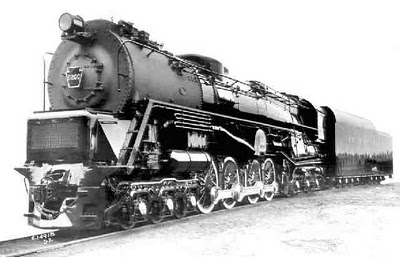 I stopped by Jack's house after lunch today and noticed he had an old Lionel steam locomotive sitting in a display case. I didn't think much about it, I mean lots of people had Lionel trains when they were kids, and some of them held onto them. I had a diesel, long gone, and Jack had a steam engine. That's all fine and well until he tells me that it is a model of a steam turbine powered locomotive.

The modern steam turbine has been with us for over 100 years. It seems there were numerous attempts to build a practical steam turbine powered locomotive during the first half of the 20th century. Only a few could be considered a practical success. The picture is of an American steam turbine powered locomotive. Note that it uses the same large size driving wheels as a conventional steam powered locomotive, and in fact uses the same kind of connecting rods to link the driving wheels together. However, there is no piston and cylinder. The round thing in the middle of the side, right above the drive wheels, is the turbine housing.

Posted by Chuck Pergiel at 7:54 PM