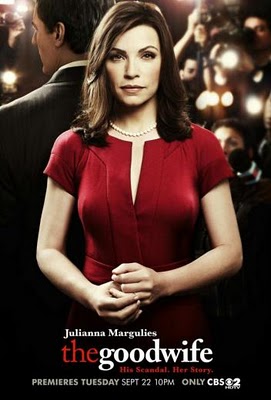 My wife and I have been looking for a new crime series to watch. We've watched all the original CSI and Law & Order: Criminal Intent episodes. We tried Burn Notice and Bones, but they didn't make the cut. I can't watch CSI:New York, CSI:Miami or Law & Order: SVU (lead actor roles are too macho). The original Law & Order spends too much time in the courtroom arguing bizarre points of law for my taste.

Daring daughter turned us on to The Good Wife and we are enjoying it enough to dig up the old episodes on the internet. The Good Wife has a lot of good things going for it:
But the best part is the pervasive corruption. It's like a network of lines spread throughout the population. The lines don't touch everybody, at least not directly, but it's all around, all the time. It's hidden so you don't see it directly and some of it may never come to light, but it's always there. Is the iffy husband corrupt? Well, I've watched enough episodes to see where the battle lines have been drawn, and it's pretty clear that he is one of the good guys, or at least he is on "our" side.

I am pretty sure corruption has been around as long as there has been something that was worth corrupting, i.e. forever. The show's story line sounds like it is making progress against the bad guys, and I imagine the current villain will get his come-uppance in the season finale, but corruption is eternal, so next year we'll have a new villain and the cycle will continue.

Email ThisBlogThis!Share to TwitterShare to FacebookShare to Pinterest
Labels: TV