Drove down to Eugene today to resupply our poor, starving children. Dubious daughter selected the Morning Glory Cafe for brunch. I was thinking pancakes or an omelet, but it turns out to be one of them funny vegetarian joints, and they had neither omelets nor pancakes on the menu. Lots of Tofu this and Vegan that, which is fine if that's what you are after. I settled for French toast, which is usually better than pancakes, but they never give you as much, so it is not quite as filling. The serving size here was adequate, which was good as there was no sausage or eggs to back it up. There was some kind of strawberry stuff (sugar free!) laced on top, but there was also a side of syrup (extra sugar!), so you could go either way, sweetness wise. I tried it without and it was fine, but I was hungry so poured on the syrup. 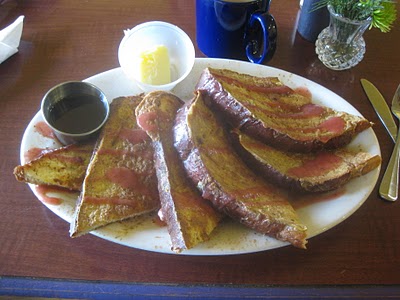 I noticed that some people were wearing leather shoes. If fact my daughter was carrying a leather purse. I thought this a bit hypocritical (not eating meat, but wearing leather), but then I realized I was in there and I certainly am not a vegetarian. Maybe none of these other people are vegetarians either. Maybe they were all wishing for bacon and eggs but somehow got hornswaggled into coming here. I mean it could have happened. Then I realized that not all vegetarians refrain from eating meat for ethical reasons. Some people may just do it for health reasons, real or imaginary.

Still, the food was good, the prices weren't too bad for Sunday Brunch, and the place was busy. We had to wait ten or fifteen minutes for a table.

Update: There was a sticker on the door proclaiming this place to be a "Hate Free Zone". The busboy was wearing a T-shirt that said "I Hate Seagulls".

Email ThisBlogThis!Share to TwitterShare to FacebookShare to Pinterest
Labels: Food