The day I picked up me new spanner from me cousin it got a flat. I had taken it for a short spin near his house and everything was fine. Later, when I went to load it in my truck, the front tire was dead flat. That's okay, flats are a normal part of life with bicycles, I'll fix it when I get home.

Pull out the tube and it's got a big stinking hole in it, and the rubber around the hole has been stretched out of shape. I didn't find anything wrong with the tire, no thorns or nails or anything. Had the tube somehow gotten pinched when it was installed last time, and it just happened to blow out now? I dunno. Put a new tube in and off we go.

Yesterday I went to go for a ride and that darn front tire is flat again, and it's not just low, it's dead flat. Put the air hose on it and it's like there is no tube connected to the valve stem: nothing happens at all, just a giant hiss of air. Pull the tire and tube, and looky here, there's a big stinking hole in the tube. You know, that looks suspiciously like the last hole. What's going on? I look all around the outside of the tire and find nothing. OK, fine, we'll look around the inside of the tire. Nothing, nothing, nothing, wait a minute, what's this? 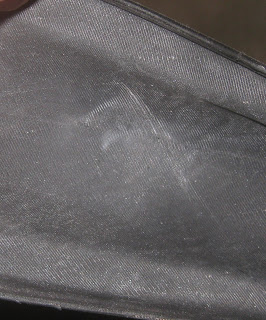 Doesn't look like anything, but it does look different than the rest of tire. I poke at it, and, lo and behold! A great big stinking hole! 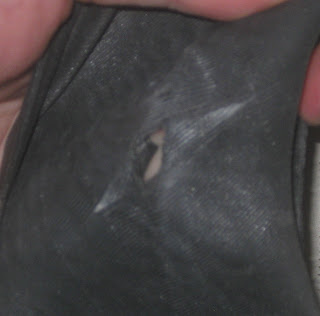 That's the tip of my finger pushing through the tire. I think that once upon a time someone ran over a railroad spike. Fortunately I had another tire from another old bike lying around and I was able to use it.

The weirdest part though is that the last flat was two months and 50 miles ago.