Went to see Rolling Thunder at the Hollywood theater last night. It was a pretty sad story enlivened by a couple of happy bits. Movie starts off with a small group of military men in full dress uniform flying in a Lear Jet* to a biggish home town welcome in San Antonio, Texas. I say biggish because there are a couple of hundred people there, a high school band, and handful of people from the local TV stations. I think these guys are Viet Nam vets returning from the war and I'm wondering why the military is flying them in a Lear Jet. I always thought troops were transported on real military transports or else on commercial flights. What's going on that these guys rate their own business jet? Eventually I figure out that these guys are not just returning veterans, but returning POW's (Prisoners Of War) who have just been released by the North Vietnamese. As they are coming in the Sargent tells the major that he doesn't think he can face all those people. The major tells him to put his sunglasses on. When they arrive (on the red carpet, even) one of the presiding officials asks the Major to say a few words, and he does. He speaks a couple of sentences into the microphones and everyone is happy and they can have their family reunions. I'm thinking this is what separates officers from the enlisted men: knowing ahead of time that some knothead is going to ask you to say a few words, preparing those words, and then delivering them on cue. What a horrible thing to have happen to you if you weren't prepared for it.

Things go very badly for the major once he's home. You can read all about it elsewhere, or here, or here.

Linda Haynes as the groupie

A young woman, now approaching 30, has a crush on him. She's been wearing his ID bracelet for the seven years that he was locked  up. She's had at least one marriage go South, she's looking for a decent man, and she is hoping the major will be the one. Makes we wonder if there really is a shortage of decent men, or is it that we just don't know how to get along with each other? One of the lessons we constantly repeat to ourselves is that no one is perfect, everyone has some kind of flaws. Secretly I wonder if this is true. Are there really no perfect people? Well, if we were going to look for any we would need to agree on just what perfect means, and I kind of doubt that will ever happen, so I guess we just gonna have to be satisfied with a relative scale of good and bad. In any case our girl decided that the major measures up and she wants to be his. At this point, he is not a good choice.

Eventually the Major tracks down the bad guys whereupon he pays a visit to the Sargent, who is stuck in a wonderful American domestic nightmare. The Major apprises the Sargent of the situation and tells him to get his gear, whereupon Sargent glum comes alive. Oh, boy, we're going to go kill some people! That is something he understands, he is back in his element, he has been rescued from domestic bliss. Praise the Lord! 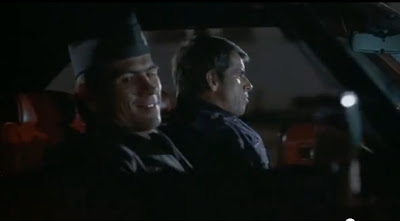 We get the patented Tommy Lee Jones smile just before they go into action. They manage to kill half the bad guys before they figure out what's going on, then we have a real gun fight. Bad guys die, good guys, wounded but alive, limp from the scene. Fade to black.