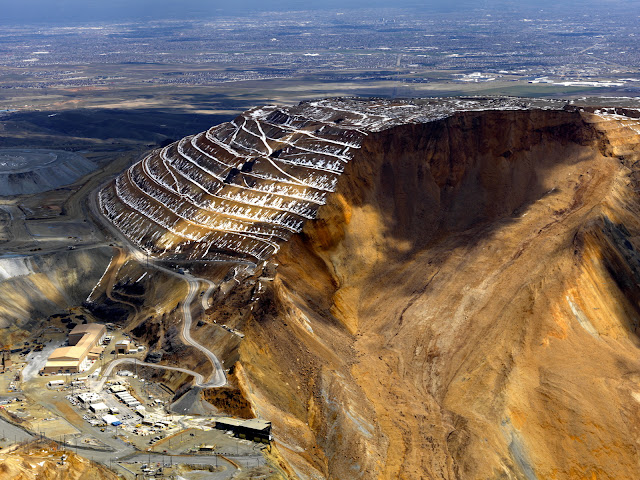 Another IMPORTANT news story that was totally unreported by the big wigs. It's taken almost two weeks to wind it's way to me. Nobody hurt is why. The mining company had monitoring equipment that warned them of impending doom and they shut down operations the day before. The size of the landslide surprised them and buried some equipment. Mine is run by the Rio Tinto company out of Australia. Mine workers were "asked" to take a leave of absence until damage is repaired. Seems to me that repairing the damage is going to be a whole lot like mining as usual, i.e. lots of digging and hauling, so I expect the worker bees will only be out of work until the dirt nerds work out a plan. This is in Utah which is Mormon country, which means this is probably a right-to-work state, which is why we haven't heard from the Union. Mormons are a little odd (to quote W.C. Fields "never trust a man who doesn't drink") but they have a number of good qualities, like being hard workers, so the mine company couldn't ask for a better location. On the other hand I expect someone to concoct a lawsuit based on not being informed of the impending doom and it's impact on the price of the company's stock.

It's a big mine. It produces 1% of the world's copper, or at least it did. Mining and agriculture are similar in that they both suffer from over-production. Farmer has a bumper crop, so does everyone else, there's a glut on the market and price of whatever it is falls through the floor and the farmer goes broke. Same thing with mining. Miner goes into mining because there is a demand for a metal. If he makes a big strike and starts producing more metal the price falls and his vision of riches vanish. So this landslide could be a blessing for the copper industry.

I was at Home Depot looking at copper pipe a couple of years ago and the guy on the floor was telling me that you could probably get more for copper pipe at the scrap yard than Home Depot was charging for it. i.e. You could make money by buying copper pipe at Home Depot and taking it across town to the scrap yard to sell it. I didn't try it, I didn't even look into it. It seemed like sacrilege to me. Besides the price difference was probably only a few cents a pound, so it would have taken a sizable cash outlay to make it a worthwhile endeavor.