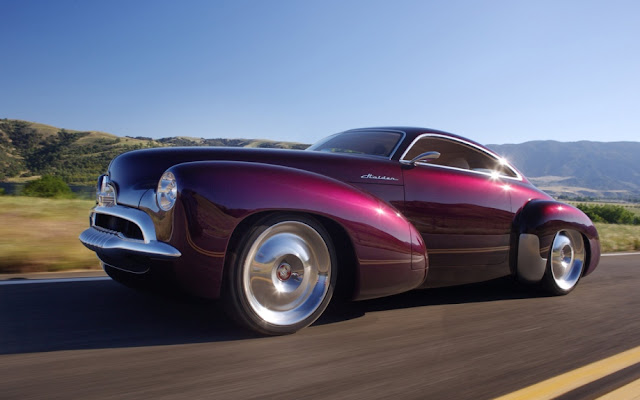 Just the coolest looking car in the world.

Drive home the other day, coincidentally during rush hour. The on ramp to 217 Northbound from Lake Oswego was backed up to beat the band, so I thought fine, I'll just take the side streets. It won't be any quicker, it will take just as long or longer than creeping along at 5 MPH for infinity, but at least it will be different. And there were a couple of occasions where I was actually able to go fast enough to catch a bit of a breeze. It was warm, and I was one with the heat. I got to stop and sit at many traffic lights, and I started turning off the engine when that happened. I am not sure why. I doubt it saves more than a nickel's worth of gasoline, and it puts extra wear and tear on the starter, so I can't justify it from an economy standpoint. But when the engine shut off I immediately felt calmer. Weird.
Taking the Sunset Highway to Hillsboro it's generally pretty smooth sailing, at least if it's not rush hour. After you pass 185th Avenue the road narrows from three lanes to two, and things start to get a little more clogged up. I don't think it's just the narrower road, I think it's a cultural thing. People who live in town, in Beaverton anyway, are go-getters, they don't have as far to drive and are not so concerned about mileage. People who live farther out are more economy minded and so restrict their speed to 55 in hopes of getting that magical number of miles per gallon they so fervently crave. Or at least a larger percentage of them do. Anyway it's really weird. The farther out you go, the slower the traffic goes. I am afraid that if I tried to drive to the beach, by the time I got to the pass over the coast range traffic will have come to a stop.
The reason kids have more wrecks is because they are playing the odds as they see them. Kids have been down the road a hundred times, and nothing happened, so they think nothing is ever going to happen, so they press their luck. People who have been down the road a thousand times are more likely to have seen something happen that could have caused them trouble. It didn't kill them, so they are more cautious. The more you drive, the more potentially troublesome events you have witnessed. If they don't kill you, they should make you more cautious.

Update August 2015. I think the catalytic convertor was on the way out. It was causing some unpleasant rumbling in the exhaust system, which is why shutting the engine off made me feel calmer.
Posted by Chuck Pergiel at 10:48 PM