one smart day and one stupid day 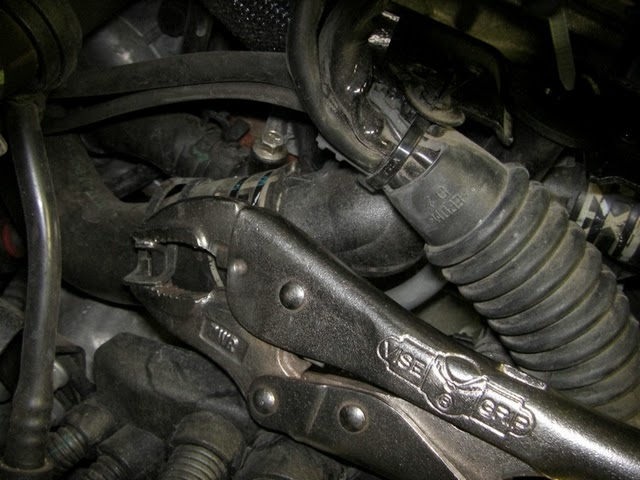 Here is somebody else compressing a spring hose clamp using Vise Grips. Notice the trademark on the handle. Lots of people make look-a-likes. Stick with the real thing. They cost more but they are darn well worth it. Mike had to go one step farther and use a second Vise Grip to tighten the knob on the end of the handle of the first one.

Saturday was good. Accomplished a couple good things, working in the garden's here and at Lisa's. Stayed busy and hungry and slept well that night.
Today not so much. Needed to change antifreeze in truck after waterpump last week. Took an hour to remove and replace one stupid hose clamp, which I finally managed, tightening one large vise grip with another smaller visegrip by gripping the adjustment knob, in order to compress the spring clamp sufficiently to get it over the hose bump. Much cursing involved.
Then since things were going so well, I decided to tackle the idler arm, which was aged and loose. Stupidly I only loosened the nut on the ball joint, instead of removing it completely, and put the clamp puller on it. Since it did not give way readily, I left it on tight as I gathered tools, but 2 minutes later, the moment I heard it click apart, after the split second of satisfaction that it worked, I realized I was screwed. The tight taper fit is the only thing that keeps the post from turning. And it did and I was. More cursing, into the darkness of evening. I bailed and washed up. Job unfinished.
I would have done better sitting and watching Gidget reruns eating pound cake.
Or maybe not. It put me in the commensurate ill humor required to accept my fate as a working class stooge which I will be again tomorrow. Even though I somewhat enjoy my work, I find it better to not be in the best mood when I go there. It would be insane to enjoy a salary job, I think.
And, at least I have something of my own to worry about and have to get home to tomorrow afternoon. Chances are, even with the best of planning, I probably would not have remembered that fact of ball joints. Darn ball joints. I think a die grinder will be involved. It often is.


And I got that idler arm replaced. The trick was to re-tighten the loosened nut to re-set the taper in the arm, (basically starting over)  which then held the taper fast while I undid the metal-lok nut. Then used the balljoint separator. Tightened it as much as I dared (safety glasses) then hit it with a chisel and hammer, whereupon it clicked free. Removed the idler arm and replaced. Putting the nut back on required c-clamping the arms together to make the taper grab sufficiently to prevent spinning as I tightened the nut.
The tension of hardened materials is interesting. So much depends on that miniscule  amount of permanent springback.

Posted by Chuck Pergiel at 8:49 AM