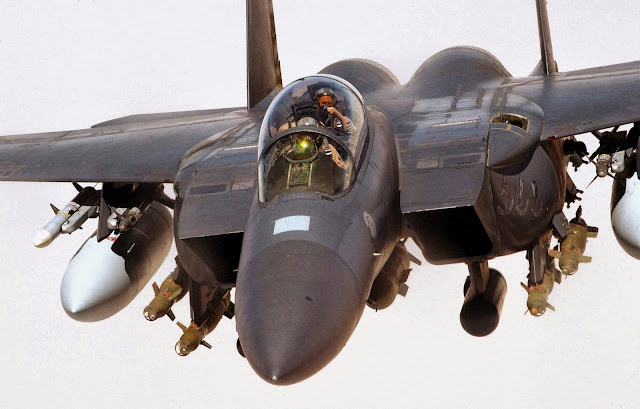 Sometimes it takes a good long while for the obvious to make its way to the front of my brain where I can recognize it. Take, for instance, the brand name Frigidaire. We had a refrigerator of that make when I was a kid. We always called it "the fridge". It wasn't until many years later that I realized the name came from combining the two words "frigid" and "air", and then tacking an e on the end to make it French or something, Frigid Air. What a concept.
Looking at airplane specifications, mostly just to see how different warbirds compare in terms of size and weight, I noticed that the wing loading seemed awfully high, like 50 pounds per square foot (metric). Put 50 pounds in a box and drop it and it will fall through the air like a lead balloon.
Pictures of airplanes flying always look like the wings are totally level, so it must be that Bernoulli principle, the difference in air pressure between the high velocity air on the upper side, and the slower air on the lower side, right? Except for the B-52. B-52's always look like they are headed downhill.
And what's the deal with "rotation" at lift off? Airplanes charge down the runway with their wings all nice and level until they get to their flying speed and then the pilot hauls back on the stick, the plane takes on a nose up attitude and it leaps into the air. Magic!
The key word here is "plane". Much like power boats get up on a "plane" on the water, that's what airplanes are doing, they are "planing" on air.  At high speeds it doesn't take much of an angle of produce all the air pressure you need to support your multi-ton aircraft. At lower speeds it takes more of an angle. The appearance of the airplane flying right along the same line as its wings at liftoff is an illusion. It is still going 99% of it's horizontal velocity, it's just going up because the wings are pushing air down. It's travel vector is still much more in line with the ground than with with the angle of the wings.
The Bernoulli effect? All that does is add a bit of efficiency.
Posted by Chuck Pergiel at 9:21 AM