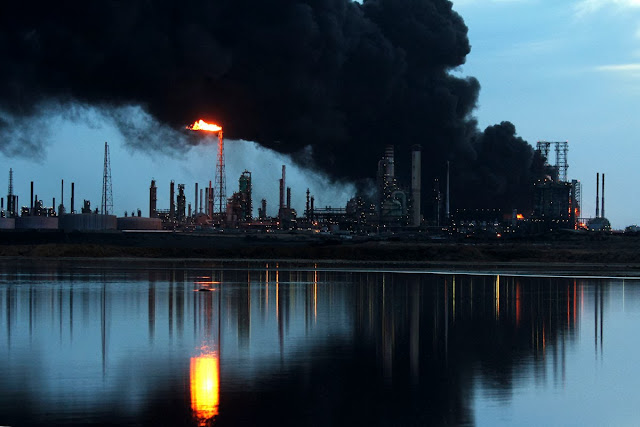 I don't like the term "War Fighter", and not just because it was George Bush's favorite phrase. We had perfectly cromunlent words like soldier, sailor, marine and airman, and they got us through umpteen previous, real wars, but now that we're engaged in glorified police actions worldwide we need a new term? Bah and humbug.
I read something the other day that said the reason we were friends with Saudi Arabia was to ensure the free flow of oil, not just to ourselves (the USA), but world wide.
Then I heard the news that Iraq is now the second largest oil producer in the world. That's pretty impressive considering they were down to practically zero due to the last Gulf War. It occurs to me that this might be the real reason we picked a fight with them, not because they were threatening to use the weapons of mass destruction that they had possibly built, not because they were threatening to stop using the dollar as the medium for oil pricing, not because Saddam was a vicious asshole. We picked on Saddam because he was not keeping up his share of oil production. His production was slipping, badly, and that was unforgivable.
The War on Terror is a big production, but it is basically a show, a Showtime Production if you will. Big budget, cast of thousands, lots of press, lots of photo ops, headlines everyday, but we aren't really serious about it. If we were serious we wouldn't be playing patty-cake with Saudi Arabia.
Terrorists commit atrocities everyday, but in the grand scheme of things they are like airplane crashes, or even automobile crashes. Yes, horrible things happen, innocent people get killed, maimed or injured in all kinds of horrible ways, but all-in-all, it is a small percentage of the world population that suffers. For 99.999% of the people in the world it doesn't exist. You are probably more likely to die in a car wreck, a helicopter crash or gang warfare.
So the powers that be are not going to take terrorism seriously, not until it starts having a significant effect on their bottom line. Part of the problem is that people are only human. It is very difficult to accomplish anything in this world, even when you are concentrating. If you allow yourself to get distracted by concerns other than your main one, your main concern is going to suffer. People who have built large corporations have done so by concentrating on that building, not by worrying about every baby that lands on their doorstep.
We have all benefited from these giant financial conglomerations. Mass production, high technology, lower costs, and plentiful food have all contributed to where we are now. Okay, not everyone is living "the good life", but not too many people are hitting rats over the head with rocks in order to get their next meal. Well, at least I don't think so. And now that I mention it, I'm not sure that is any worse than the kind of crap we get to deal with in the first world.
Posted by Chuck Pergiel at 3:55 PM