How (Not) To Replace a Burned Out Light Bulb

The light over the basement stairs burned out. It's a small, circular, fluorescent fixture. Fluorescent is better, don't cha know? That's what my scientist mother always preached to me. Uses less electricity to produce the same amount of light, and electricity costs money, money that could be used to buy shoes, or not, as California Bob tells it.
This happened once before and that time I found a replacement bulb at Freddies (our local mega-mart), so I drove over there and picked up a nine inch circular replacement fluorescent bulb for $9. A bit steep I thought, but even cheeseburgers are $9 these days, so what can you expect? Take it home and plug it in and it doesn't work. Bah and humbug.
Fortunately I have a second identical fixture that is working, so I try both bulbs in it and they both work. The old one is noticeably dimmer, but it's good enough. Okay, so the electronical gizmo is probably kaput. It comes off with a twist, but it's still connected by the wires. I make sure the light switch is off and then I unfasten the wire nuts and the wires come apart. I put the wire nuts back on the black and white wires so we won't electrocute any gerfinger poken tourists while I am gone. 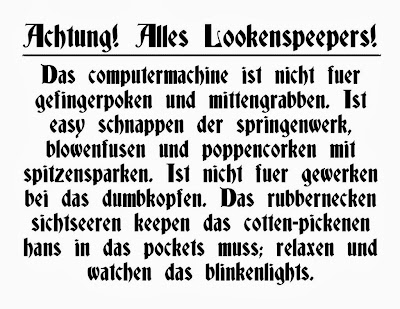 According to gospel I should have turned off the circuit breaker, but if I am careful I don't consider this any more dangerous than plugging in a lamp cord. I managed to get my finger between the prongs of my toy electric train transformer when I was a kid when I plugged it into an extension cord once. Let me tell you, that was a thrill.
Off to Lowe's I go. There are a Lowe's and a Home Depot right next to each other here. I used to go to Home Depot, but somewhere along the way I got tired of the cheapest of everything all the time. In many cases, the cheapest is just fine, but sometimes it is worthwhile to pay a little more and get something a little better. Might last longer, might be easier to use or install. Might just be a change from squabbling over every dang blasted nickel. I don't squabble over pennies any more.
Find the light bulb aisle. They have nine zillion different light bulbs, but none of the gizmos I am looking for. Turn the corner and there is a red vested employee asking if I need some help. Well, yes, I do. Well, no sir, we don't have any of those, but we do have this fixture over in the closeout bin. It's also $9, but it's a different style and uses two bulbs, and yes, I could probably cut it apart and use some of the bits to repair my old fixture, but that is the road to perdition. I pass.

Let's look at the fixtures. We take two steps around the corner and there they are, all the fluorescent fixtures in the world. That one looks like a good one, similar style, and look, it's only $15. Cool. It isn't until I have it home and I open the package that I discover that it uses not just one circular fluorescent bulb, but two, of different sizes, mounted concentrically. Well, poop. Will it work with just the one I have? Oh, wait a minute, what's this? It comes complete with both bulbs! Well, happy day.
Now all we have to do is mount it. First thing is to connect the wires with the wire nuts. If I stand on the correct step I am just tall enough to reach without straining, but we have two ground wires on the fixture and getting three wires to line up so you can jam a wire nut over their ends is at least twice as hard as when there are just two wires. (Two ground wires on the fixture plus one bare ground wire from the box makes three wires.) The fixture itself weighs next to nothing, so I am not worried about any strain on the wires. Also, I'm not a professional and I'm not getting paid. Befitting my amateur status I manage to drop the wire nut at least a couple of times, which means walking down the stairs to the bottom so I can search for the near invisible critter in the dark. Because the light is burned out.

Get all the wires connected, now all we have to do is screw the fixture to the ceiling. The electrical box in the ceiling is one of these half deep things, and the fixture is basically a flat plate, so the three feet of wire is going to have to become very friendly in order to fit in the two cubic inches of space allowed. I twist the mess up, press the fixture to the ceiling, manage to spy one of the screw holes and get one screw started. But fiddle as I might, I cannot get the second screw started. Oh yes, even though the fixture has keyhole slots that should allow you to put the screws in first and then put the fixture on over them, the heads of the screws are too big to fit through the large end of the keyholes.
Pull the fixture off, measure the distance between the holes and everybody agrees that it is 2 & 3/4 inches, center to center, except for the second set of holes in the old fixture which are 3 & 1/2 inches apart. So the holes should line up and the screws should go in, and they probably would except for the stupid wires that are trying to escape their captivity. I pull out my change-a-blade screwdriver, and go to swap the phillips blade for a straight one and ---- !!!! the straight blade is missing! Arrrgggh! Cretins! Criminals! Bah and humbug. Go get another straight bladed screwdriver. The only one handy is tiny, but it works well enough to push the wayward wire out of the way, and I finally get the screw in.


I use my newly repowered cordless drill to spin the screws in the rest of the way, and then I use my regular phillips to check their tightness. Install the bulbs. The bulbs connect to short little pigtails hanging out of the fixture. They look like they should be long enough that you could just mount the bulbs anywhere, but in fact the wires are only long enough to allow the the bulbs to mount in one position.
Last step is to mount the cover (diffuser). The old one screwed into the fixture much like a jam jar screws into it's lid. This one has three little levers with attached hooks that grab the cover from the inside. They work fine, but operating them reveals that the fixture is loose on the ceiling. Take the cover off and tighten the screws again. They are tight, I think they have bottomed out against the top (bottom?) of the box. The fixture is not locked down, but it is snug, and it's not like it's going to fall off, I mean the screwheads won't fit through the holes, remember? So I turn it on, and low and behold, light! And even though there are now two bulbs instead of one, it is not insufferably bright, so I declare victory and retire to my cave to recover from my exertions and write this fascinating account.

Posted by Chuck Pergiel at 2:54 PM