The Quantum Theif by Hannu Rajaniemi 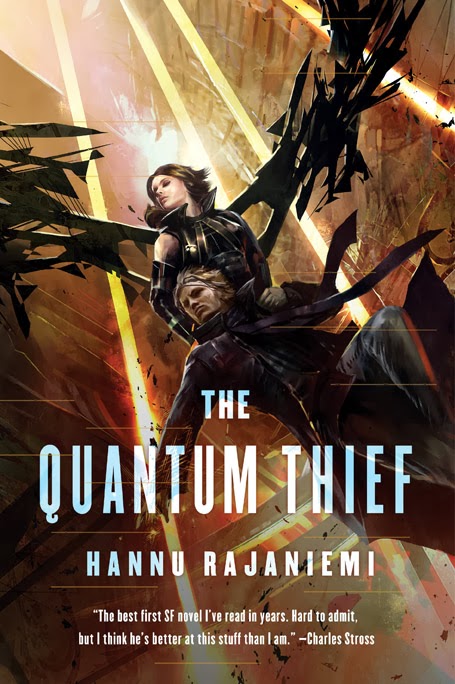 I am beginning to wonder if maybe our purpose here is to create the next race of intelligent beings. So many of the stories I've been reading lately seem to involve uploading and downloading memories or entire minds. I don't think we are ever going to be able to do that with our organic brains, but you should be able to build that facility into a mechanical brain. Mechanical brains could be built with other features as well, like being able to sleep for a thousand years, or communicate via radio with other brains. We are still a long way from building a brain as compact and powerful as a human brain, but we are getting better all the time. The IBM machine that played Jeopardy and Google's self driving car are signs that computers are becoming more capable.
Meanwhile the biological sciences haven't been sitting on their hands. People are messing about with genes and I just read that someone is trying to figure out how cells talk to each other. It's kind of like the more we know, the more we find out how little we know about biology. A few months ago I read about someone being able to sort of reconstruct an image of what a person was seeing by using data from some kind of brain scan, an MRI I believe. Who know's where that technology will be in five or ten decades?
Isaac Asimov's robots used positronic brains, which were basically three dimensional computer chips. Right now chips are still two dimensional, but it won't be long until we reach the point where someone is going to try stacking up a hundred of them into one solid block. Connecting it to the outside world will be a bit of a trick, and until we start working with much lower voltages, cooling will be problematic.
But we're getting there. Building an intelligent machine might not be our purpose, but it might be our function. I wonder whether they could ever be self sufficient. All people need is food, air and water and they can reproduce themselves endlessly. Machines need other machines and raw materials and machines to dig up raw materials and machines to make energy and machines to make machines. All people need is a planet covered with a complete eco-system filled with plants and animals. Could we construct a race of intelligent, self replicating, space faring (vacuum beathing) robots? How long would they survive?
Given the energy cost of getting into orbit, I wonder if we might be better off establishing a race of mechanical moon men, and let them do our space exploration for us. With our proxies out conquering the galaxy for us, we wouldn't need to be worried about doing it ourselves and we could settle down to making the earth a nice place to live.

Posted by Chuck Pergiel at 1:59 PM