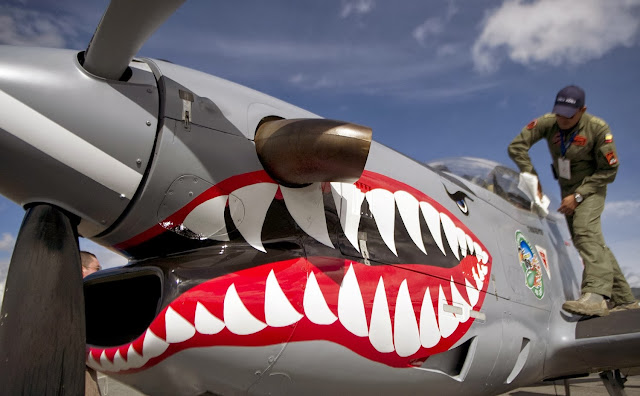 The Washington Post has a story by Dana Priest about the civil war in Columbia. The more I read about the war on drugs, the more I think it is being encouraged by the participants. I doubt that we will ever really know who is at the top of the food chain in the drug cartels, but they are the ones making the big bucks, and they wouldn't be making that much money if drugs were legal, so it is in their best interest to ensure that drugs remain verboten.
The "war fighters" and their suppliers are all in favor of it because it keeps them busy doing what they have been trained to do. Plus it keeps them employed, which can't be discounted in these days of rampant unemployment.
The pharmaceutical industry in the USA is in favor of it because illegal narcotics are undercutting the price of legal pain killers, which can't be good for their bottom line. Stamp out enough heroin so that price rises and Oxycontin becomes price competitive again.
I am sure there are some people who believe that the war on drugs is the only way to 'save the children' and prevent people from ruining their lives with drug addiction. I don't think it will do either of those things. Oh, with draconian enforcement I suppose it could, but the impact on life, liberty and the pursuit of happiness would be crushing.
On the other hand what are we going to do with all those people fighting the war on drugs (from both sides) if we were to stop prosecuting this war? Put them on dole and have them sit around and watch daytime TV until it's time to pick up their daily ration of intoxicants?
I know North Korea is a horrible example, but have you seen some of these mass dance performances they put on? Maybe we could stage something like that, just to give people something to do, keep them occupied. Kind of sad that we have all these people with all their talents and abilities just sitting around watching daytime TV. There has got to be a better solution, I mean a better solution than outfitting them with a gun and sending them out to kill other people. I just wish I knew what it was.
Posted by Chuck Pergiel at 2:25 PM

The interests of the drug cartel boses and the DEA bosses are identical.

Good to know that I'm not the only one who thinks this way.