Good Morning To Me 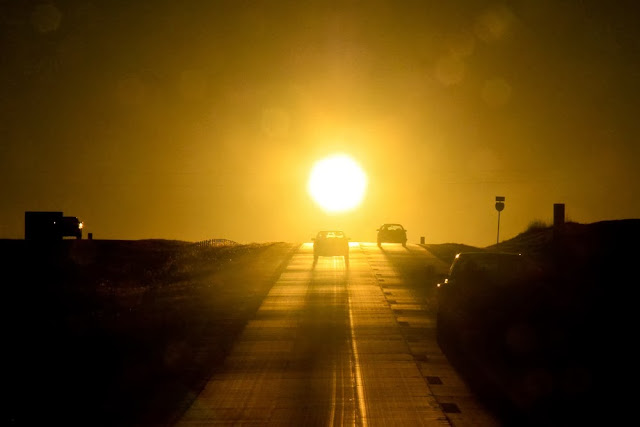 Joy to the world. Yeah, right.

10AM and all's well. Rolled out of bed at 7:20 this morning, threw on my clothes, splashed my face with water, slicked back my hair, trudged out to the truck all covered with frost, put on my hat, added a cup of coolant to the radiator and half a gallon to the reservoir and a quart of oil to the crankcase, scraped the frost off the windshield, side windows and outside mirrors using my Fred Meyer's Rewards Card. It's the only one in my wallet that is substantial enough for the job and is not falling apart.
7:35AM and we're on the road to Lake Oswego. Dutiful daughter has started a new job with a real estate company and this is a week of training days. Since the Chrysler is still dead, or dead again, depending on how you look at it, and we have not been able to decide on a replacement, dear ol' Dad gets to drive dutiful to work.
This two round trips a day for me is a real stinker. I probably shouldn't complain, I might end up in Boston where this kind of thing is the norm. Today should be the last day. Tomorrow Mom flies home so dutiful will be able to drive herself using Mom's car the rest of this week. Next week she starts at the company's Beaverton office, so the commute will only be half as long, and God willing and the creek don't rise, she may have a car of her own.
The first day, Monday, was the absolute worst. I think I spent four hours on the road driving 100 miles. There was cop or a wreck or a gumball every fifty feet. Google says that at this time of day (10AM) it should only take two and a half. Yesterday was a little better: only three and a half hours. So far, today hasn't been two bad, only an hour and a half. Of course, I'm only half done.
Stopped off at the McDonald's in North Plains on the way home to pick up some breakfast. The new overpass over the Sunset Highway is complete and it looks like the bridge construction crew has cleared out, but now the McDonald's is being renovated, so we aren't out of the woods yet: the drive through was closed. I had to park and get out and walk inside. Oh, the humanity! Good thing I had my hat.
The Sunset was living up to its name this morning (sunrise, sunset, don't be picky). The sun was sitting right on the horizon, just to the right of center. I was really wishing for some sunspots, six inch diameter, round, tinted plastic film jobbies that you could just stick on the windshield right over the hot spot. Don't know if there is such a thing, but there ought to be. Later on I realized an index card clamped to the sun visor with a spring type clothes pin would probably work just as well. I was able to use the inside mirror to block the sun on some sections of the road.
There was frost on the windshield Monday morning, but it was soft and we were able to just brush it off using a leather glove. I took this as a sign and wrote ICE SCRAPERS on the shopping list, but I didn't actually go out and buy any, and Tuesday morning there was no frost. And so grasshopper, today the frost returned with a vengeance. No easy-peasey brush it away with a wave of your hand this morning. Today it was stuck hard. I managed to knock enough off with the credit card so we could see if we hit something, but I probably ruined my wiper blades running them back and forth over the remaining ice deposits.
Ah well. Dutiful seems to like her job, and I should only have to make this trip one more time, and if I'm lucky we'll find a car for her in the next couple of days and all will be well.

What always amazes me are the Ignorami coming out of the sun with NO lights on, because THEY can see perfectly well :-(

BTW, we don't have centre strips here other than on the Autobahn. So here you have 2 cars, each doing 60+mph, passing just inches apart in opposite directions, hoping each is staying in their own lane despite the blinding glare!