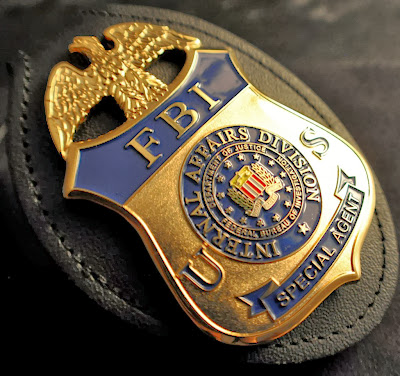 Being as my three kids have all gotten their college degrees and have not found positions that fully exploit their talents (like anyone ever does), I thought they might be amused by this. Or not. Ten of these wonderful jobs are in the medical profession in one form or another, which means ten more years of your life sucked up by the educational system. I dunno, maybe it's worth it. I never liked school very much, the pay is shit. Anyway, there were three job titles that I found kind of interesting.
Okay, anyone who watches as many crime shows on TV as I do knows that a "Special Agent" is a copper from the FBI, but that's TV, not exactly the fount of reliable information. So I go to Wikipedia where I found this semi-confusing definition.


Within the U.S. government, the title of "special agent" designates a federal criminal investigator in the GS-1811 or Diplomatic Security Service FS-2501 job series,  ... They are usually empowered to carry firearms, make arrests, and investigate violations of federal laws. The title of "Agent", "Investigator", or "Background Investigator" refers to all other 1800 series job series designations...Although some federal agencies have recently defined certain background investigators and other non-1811 personnel as "special agents", this is purely an administrative title with a different meaning, and does not confer actual Special Agent status on them. Although some 1810-series investigators are empowered in some circumstances to carry firearms and investigate crimes, they are not empowered to make arrests. In general, arrest authority is what distinguishes a traditional Special Agent (1811) from most other 1800 series personnel. There are exceptions: some 1800 series positions, such as Border Patrol Agents, have the authority to enforce federal law, and thus have arrest authority. However, unlike the 1811 Homeland Security Investigations Special Agents, they do not have the authority to conduct major criminal investigations. In general, non-1811 personnel who have arrest authority are considered "Agents" while Criminal Investigators who carry a badge, gun, credentials, and have arrest authority are considered "Special Agents". All other 1800 personnel who conduct investigations (background or otherwise) are "Investigators", "Background Investigators", or "Compliance Officers", no matter what their administrative title may be. [emphasis mine]


So if you carry a gun, you're an agent, unless you can't arrest people, in which case you aren't. But if you are empowered to carry out investigations you are, unless you work for the TSA in which case you aren't. And if your admistrative title is "agent", well then, you obviously aren't special.
You know, I probably got that all backwards, but you know what else? I don't care.