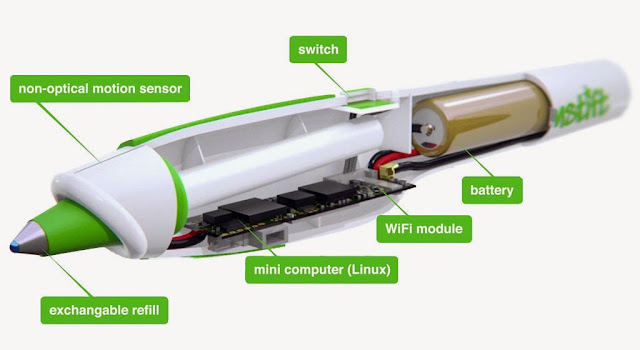 What we have here is a pen that recognizes what you have written and tells you when you have made a spelling error. How would it know?  The only people who still use cursive are old fogies, most of their handwriting is so atrocious that it can take some real effort to decipher it. So maybe they are doing hand printing recognition, which is at least plausible. On the other hand, they are talking about writing on air, that is, just making writing motions in the air with your hand. I can see doing cursive writing on air, but how do you do hand printing in the air? How do you tell when you've lifted the pen off the "paper"?

Well, that's what they claim it will be able to do, if and when they get around to building one. From the number of buzzwords packed into this piece I'm wondering if they have even made a prototype, or whether this is just vaporware.

It does have the advantage of doing away with the keyboard, though I am not sure that this is altogether a good thing. I mean, didn't we come up with the keyboard because the pen was so much work? I'm not sure my kids even know how to write in cursive,

I cannot think of a worse application for Linux. I think this is a case of microprocessor buzzword injection phenomena, although they labeled the computer as a "mini". Last time I saw a mini computer it was the size of refrigerator. And why do they need WiFi? Maybe because their pen will not have enough processor power to perform handwriting recognition on it's own.

I suppose that if you could combine this pen with a system that could project icons in your field of view (Google glass can do that, right?) you could have a truly wearable computer. This might be a challenge for the RF engineers (in order to maintain enough bandwidth on enough channels), though they seem to be able to handle a room full of cell phones without any trouble.

Posted by Chuck Pergiel at 7:18 AM

Email ThisBlogThis!Share to TwitterShare to FacebookShare to Pinterest
Labels: Computer