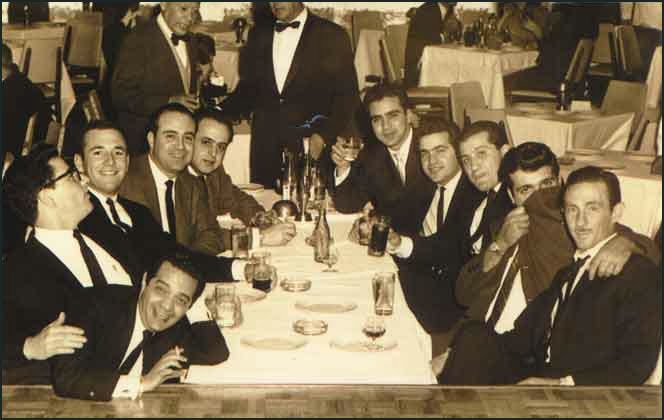 This photograph was taken in a nightclub in Mexico City on 22nd January, 1963. It is believed that the men in the photograph are all members of Operation 40. Closest to the camera on the left is Felix Rodriguez. Next to him is Porter Goss and Barry Seal. Tosh Plumlee is attempting to hide his face with his coat. Others in the pictureare Alberto 'Loco' Blanco (3rd right) and Jorgo Robreno (4th right).

Once upon a time I came across a theory about the Kennedy assassination that passed the smell test, i.e. it wasn't a complete stinker. Some drug dealing kingpin in New Orleans was unhappy about Attorney General Robert Kennedy's enthusiastic persecution of organized crime, but thinking that killing the Attorney General would simply result in him being replaced by a new, even more enthusiastic guard dog, decided to take out the man calling the shots, i.e. the President. Ruby and Oswald were both connected to the mob, and drugs are big business, so it made a kind of sense. Anyway, I thought I posted something about this once before but I can't find it now, and wading through the avalanche of Kennedy conspiracy theory info now is an endless task, so I can't point you to a really good version of this story. You're just gonna have to take my word for it. Unless you can spend the time to root it out for yourself. Inspired by Roberta X.

P.S. The picture has only a tenuous connection to this post, being as it comes from a story about Barry Seal. It makes some interesting reading in its own right.
Posted by Chuck Pergiel at 10:26 AM