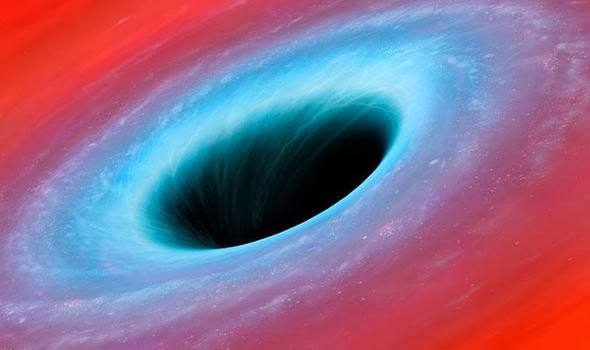 Some whiz-kids (egg-heads?) have come up with a theory that might explain some of the really weird stuff about how our universe works, like light. For instance Einstein's theory of relativity says that nothing can go faster than the speed of light. If you have three objects in a line and the center one is relatively stationary, and the ones on either end are approaching the center one at the speed of light, then you would think that their rate of closure with each other would be twice the speed of light, but it isn't. It is still only the speed of light, which does make any sense to our Newtonian-Euclidian brains. But what if these three objects that are apparently arrayed in straight line are actually three points of an equilateral triangle? Then the closure rate between any two of them would be the speed of light and not some higher value that we couldn't reach. Now if we were looking at this triangle edge on, the three objects would appear to be in a straight line, but what we are seeing is a projection of the actual universe.
Anyway, that's my take on what these guys have come up with. Those of you who have read Flatland will be familiar with idea of a universe with more or fewer dimensions. So that might be what we have here. Whether this will do us any good or not remains to be seen. I'm still thinking that our best bet for conquering the galaxy is to create a new race of mechanical moon men, designate them as our progeny and send them out to the stars.
Via Posthip Scott
Posted by Chuck Pergiel at 9:20 AM

Email ThisBlogThis!Share to TwitterShare to FacebookShare to Pinterest
Labels: Physics