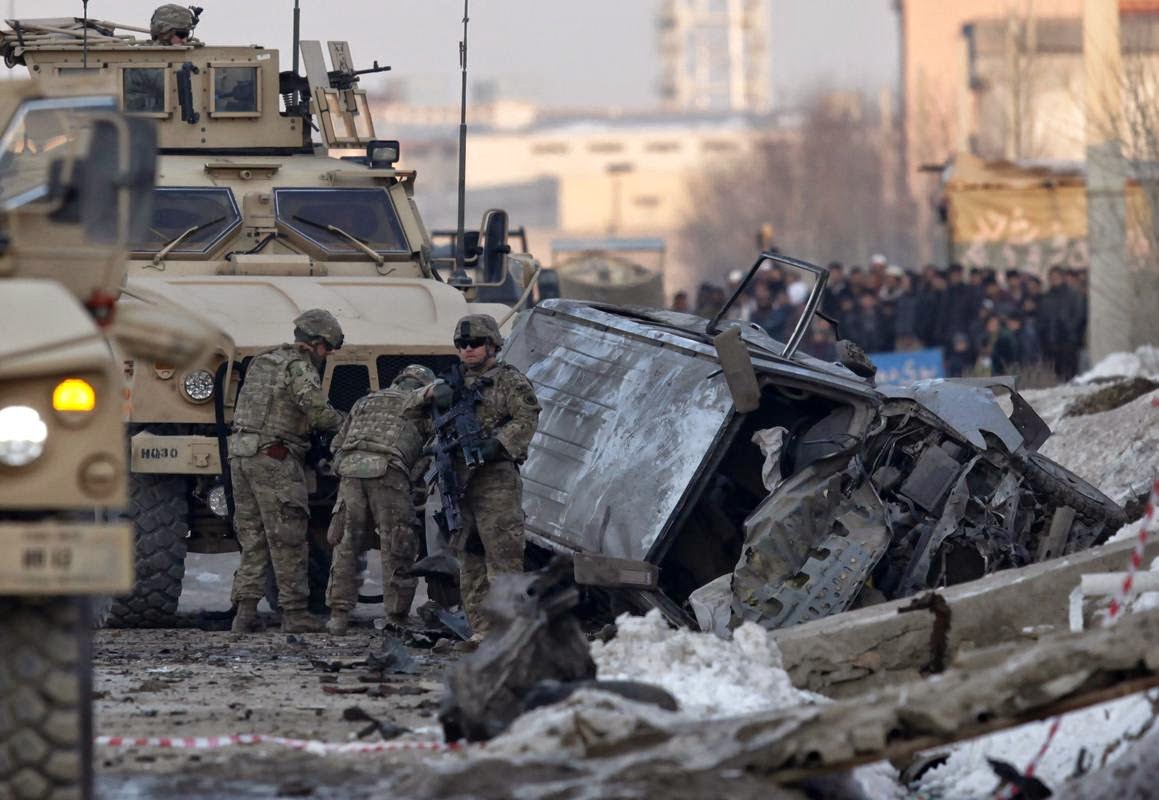 Last Summer there was a news report that said the DoD (Department of Defense) was grinding up old MRAPs into scrap, which seemed like kind of a boneheaded idea. Now it seems like there are lots of people who would like to have them, but I think they are pretty much a bunch of fools, much like wanna-be gang-bangers hanging out in their Cadillac Escalades that are parked by the curb because they can't afford the gas to drive them anywhere.

MRAPs epitomize our boneheaded approach to this war-on-terror debacle: whatever the threat is, or whatever its form, we respond with more firepower, more armor, more guns. I dunno, but I suspect that Afghanistan isn't any better off now than it was ten years ago when we first sent troops over there. I'm not going to try and speculate whether the USA is any better off or not. Perhaps the Taliban were content to have somebody to fight in their own neck of the woods. Why bother going all the way to North America? We can kill all the infidels we want, right here on our doorstep. Allah Akbar!

It only takes few people and a few pounds of material to create a vast amount of destruction that will kill hundreds of people, as we have seen time and again in other parts of the world (is it okay to call them third world hell-holes?). That we haven't seen widespread terrorist attacks all across the USA tells me we are doing something right. I don't know what that right thing might be, it's pretty hard to tell when the news is so full of things are so obviously NOT the right thing.

Whatever. The people in power, that is, the people with money, have an agenda, or a plan, or, I dunno, maybe all they have is the direction they are facing, and they are charging on regardless. The rest of us are just along for the ride, so you may as well get comfortable.

MRAPs are nuts. They weigh 15 tons and can carry a payload of maybe two tons. For comparison, an normal, freight carrying semi-truck, like one you see on the roads of America everyday weigh 20 tons (empty) and can carry a 20 ton payload. From what I've read it seems that we have built around 10,000 MRAPs at a cost of around one million dollars each, give or take a few hundred thousand. That's like 1% of the total cost of our Afghanistan Adventure [tm]. First there's:
That get's you a vehicle, but then you have to equip it with the military grade communications system and weapons, which probably cost as much as the rest of the truck put together.

According to Wikipedia, there are only two steel companies that are qualified to supply the steel armor for these vehicles, and one of them is Oregon Steel Mills, which is presumably in Oregon, which should make me happy, except this is the first I have heard of them making armor. It's also very weird that we have a steel mill at all. As far as I know we don't have any coal mines or even any iron ore mines, which are the usual prerequisites to having a steel industry. Oregon is also home to Precision Cast Parts, who specializes in making metal bits for the military, and they have been going great guns lately, which is good. It means the rich are getting richer, er, they provide lots of people with good paying jobs.

Anyway, we've spent all this money and all this time and now our big adventure is coming to a close and the guys in charge of all the MRAPs are wondering what to do with them. Since we seem to be on the outs with Pakistan (which is not necessarily a bad thing), we can't drive them to a port to be loaded on boats and shipped home. We can load them on jet cargo aircraft and fly them home, but that costs $150,000 a unit, and do you really want to spend that much money on something that will be completely useless in North America? We could "give" them to our "friends", if we could figure out who are friends were, and which friends would accept a gift from the USA, gifts that always entail obligations. Even if we figure that out, would the machines actually be of any use to them? Would they even want to keep them fed with fuel? Or would they just keep them parked by out front to impress the natives?

I imagine an enterprising man could cut the armor off on an MRAP and turn it into a useful truck, something I am sure they could use over there. You might get ten cents on the dollar, which would be pretty good for military surplus.