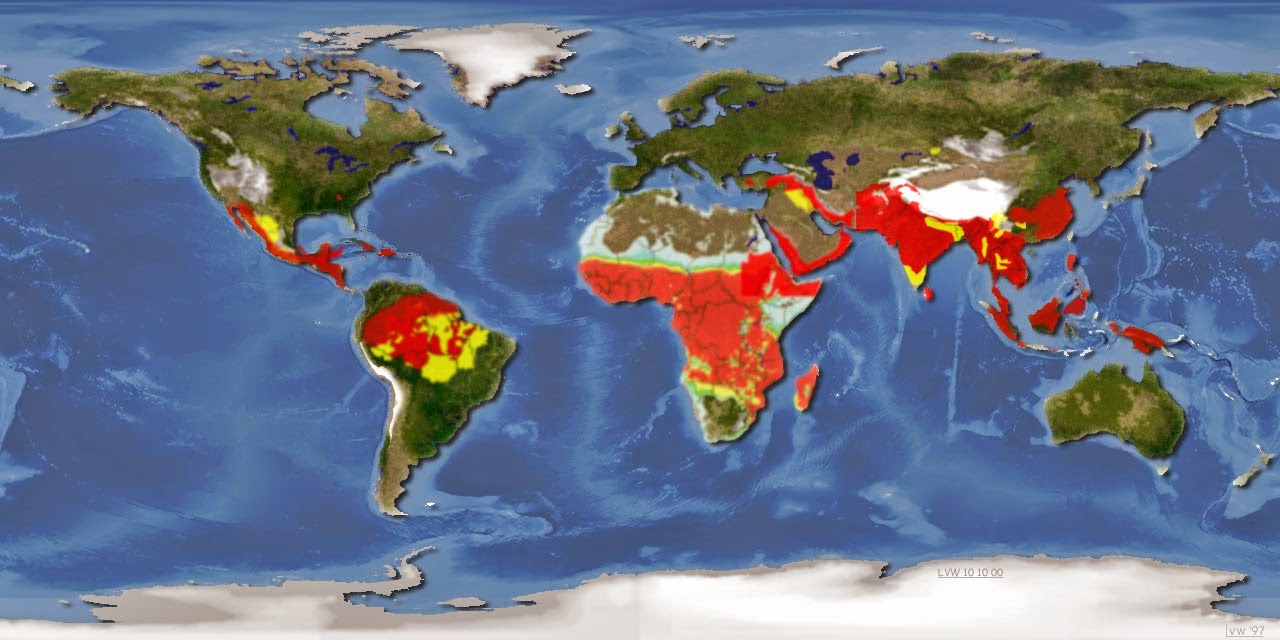 Prevalence of Malaria. Red is high, green is low.

WHO, as in World Health Organization. The world is going to hell in a hand basket. Thomas Friedman has a column today telling us all about it. I didn't finish it. I know we are going to hell, the only question in my mind is how fast we get there.

It's one thing to value life and to claim every life is important, but unless you are willing to take responsibility for the cultural conditioning of all the new people showing up on our planet everyday, I think you need to shut up. Wait, "take repsonsibility" is the wrong term, that just tells us who to blame if things go wrong, and some people will do just that. 'Yes, it was my responsibility, and I failed. I am so very, very sorry. Please don't beat me.' You can shoot the SOB who stole your money, crashed your car or wiped out the elephants, but it won't get your money back, fix your car, or bring back the elephants.

What we want is someone to step up and see that the new souls are properly indoctrinated. Many people prefer the word 'education', but education is simple. Simple if you believe in it, not so simple if you don't. Remember that book about how All I Really Need to Know I Learned in Kindergarten? That's what we're talking about here.*

So we've got some people who think life is the only thing that is important, everything else takes a distant second. This has led to widespread programs to inoculate people against common infectious diseases. These are universally regarded as good, even though they are at the root of all our problems. It's fine to inoculate people against disease, as long as you are going to ensure that they are properly indoctrinated with our sophisticated Western civilization's mode of thinking. But the people pushing the drugs are not pushing the indoctrination, so we are overpopulating 3rd world countries with barbarians. No wonder civil war, massacres and mayhem are the world's most popular sports.

So every one of those syringe weilding do-gooders needs to stay with that kid they've just inoculated and see that they learn how to behave in a civilized society. That might put a crimp in their hipster lifestyle, but it will likely save us a zillion dollars in future inoculation costs.

* Which makes me realize why in days of old kingdoms imposed a universal state religion. It ensures that everyone adheres to a certain standard of conduct, or at least it makes them aware of the rules. It makes a certain amount of sense. It's also why freedom of religion for countries that are still operating in the middle ages (like the Middle East and Africa) may not be such a good idea.

Posted by Chuck Pergiel at 9:34 AM