After WW2, the West was subsidizing West Germany and West Berlin, while the Soviet Union was extracting reparations. At least they were trying to. It was kind of like trying to squeeze blood from a turnip. Consequently the standard of living was plummeting in the East and people were fleeing in droves to the West, which didn't sit well with their new overlords and so the Berlin Wall was built to stop this white flight. People still kept trying to emigrate. Some of them succeeded. Some of them didn't. Failure usually meant prison or death. Here are some clever guys who made it. The linked stories make some interesting reading.


I hired Ivo to do some plumbing work on my house. He escaped from the Czechoslovakia with his girlfriend in 1986. They were both from the same small town. They went on vacation to Albania (now Slovenia), at the North end of the Adriatic, right next to Italy. They took their papers and cash, put them in a waterproof container, and swam across the bay to Trieste. It took them two years to get to the United States. Ivo's younger brother was opposed to him leaving, but his older sister was very in much in favor of it.

These two hippies built a couple of chairs to hang from the neutral wires on high tension towers. They climbed a 180 foot tower in the middle of the night and pulled themselves, hand over hand, across the border. Took them five hours to travel 300 yards.

Bernd Boettger tried swimming across the border via the Baltic sea, but was caught and spent a year in jail. For his next attempt he built a gasoline powered tractor to tow him. Took him 15 miles when he was picked up by a Danish lightship.

Here are a couple who didn't.
Daniela's father tried to walk his family across the border on August 13, 1961, the same day construction started on the wall. Her mother's nerve failed her and they were caught. Her father spent eight years in jail. Daniela was sent to live with her grandparents. Her family eventually got to West Germany when they were ransomed. 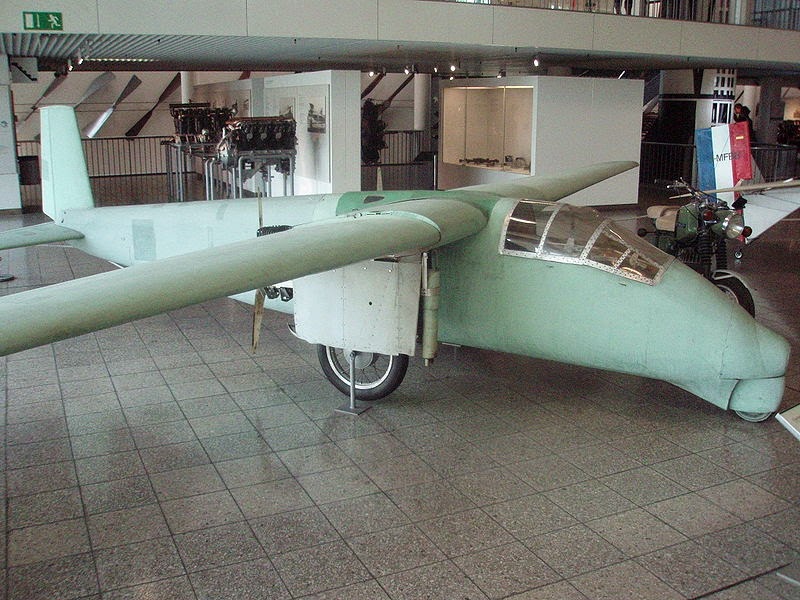 Dr. Gerhard Wagner, Kaiserslautern, designed and built this aircraft to enable his family of five to escape from East to West Germany in 1981. It was never flown. The family were arrested the day before their planned escape and imprisoned for one year. They were then deported to the Federal Republic of Germany, i.e. West Germany. Wait a minute, he's sent to prison for trying to go, and when he gets out he's sent there? He may have been ransomed by West Germany.  Photo by Cplakidas. The airplane is at Deutsches Museum.

Posted by Chuck Pergiel at 3:00 PM