I am reading about Bunnie's Novena laptop computer project and he mentions that with some fancy new solid state disk this computer is going to contain one trillion transistors.


Chipworks did an excellent initial analysis of Samsung’s V-NAND technology and you can see from this SEM image they published that V-NAND isn’t about stacking just a couple transistors, Samsung is shipping a full-on 38-layer sandwich: 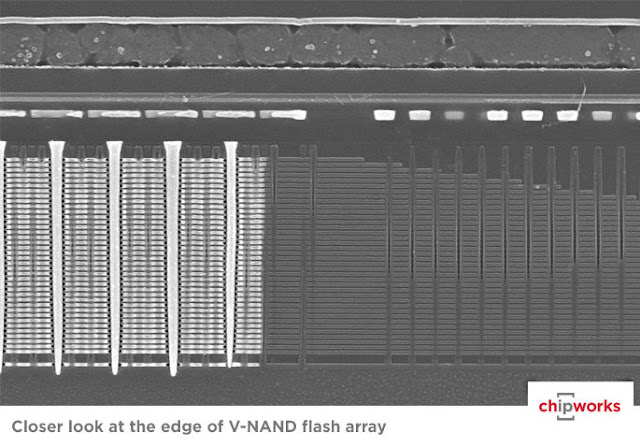 This isn’t some lame Intel-style bra-padding exercise. This is full-on process technology bad-assery at its finest. This is Neo decoding the Matrix. This is Mal shooting first. It’s a stack of almost 40 individual, active transistors in a single spot. It’s a game changer, and it’s not vapor ware. Heirloom backers will get a laptop with over 4 trillion of these transistors packed inside, and it will be awesome.

Sorry, four trillion transistors. We use thousands of dollars to buy a car and there are millions of people in a big city and billions of hurts in radio signals, but not too many things with trillions. Okay, there are terabyte disks that hold a trillion bytes, but I don't think disks, . .  wait a minute. I don't really know how disks are made these days. They used to be just really flat metal plates plated with super magic magnetic materials. But lately they've been talking about stacking bits (or domains) on end. Nah, they're still plating them. Photo-etching, like they use for making computer chips is good for small parts, maybe the size of your fingernail, but I don't think anybody is using the technique for anything that you could measure with a ruler. Well, except the military, but that's secret, so don't tell anybody.
In any case, I got to wondering how big a trillion is. One trillion is ten to the 12th power. Any time you take about powers of ten someone always brings up the metric system. It's like Godwin's law (or is it Goodwin? Whatever.) Fine, let's go with the metric system. One cc (cubic centimeter) or water weighs one gram. Each cubic millimeter of water weighs one milligram. (ten millimeters in a centimeter, ten cubed is a thousand). People, and food, are mostly water, so every time you see a milligram on a nutrition label, think cubic millimeter. Not very big, but big enough you can see it and pick it up. Kind of like one of those chunky grains of sea salt that are so popular on everything these days.
So imagine that you could package one transistor in a cubic millimeter size package. Then a thousand transistors in row would be one meter long. A thousand rows lined up next to each other would make square meter, one millimeter thick and would hold one million transistors. Stack a thousand of these panels on top of each other and you would have a cube that measured one meter every which way. It would hold one billion transistors. To get a trillion transistors you are going to need a thousand of these blocks. A cubic meter is big. To hold a your trillion transistors / thousand cubic meters would you would need 15 semi-trailers. Huh. If they are getting all those transistors in a laptop size package, they must be very much smaller than a grain of salt.

P.S. Mal shot first, in case you were wondering like I was.

Email ThisBlogThis!Share to TwitterShare to FacebookShare to Pinterest
Labels: Technology

A trillion is only 10 to the twelfth in short-scale countries like the USA.

I long-scale countries, like those in Europe, a trillion is ten to the eighteenth.
6=million, 12=billion, 18=trillion.

Size matters, and the USA is coming up short ;-)