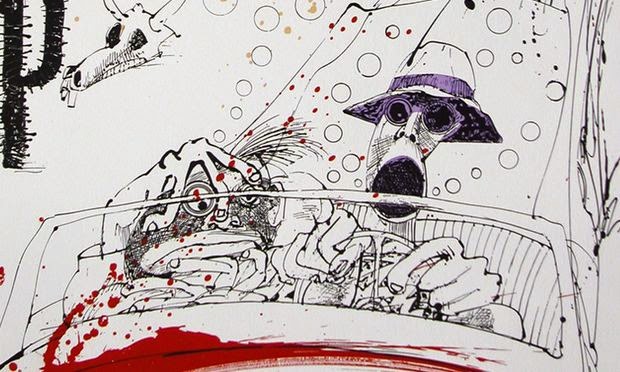 The first time I ever heard of adrenochrome is when Hunter S. Thompson mentioned it in Rolling Stone's serialization of Fear and Loathing in Las Vegas some forty years ago. It didn't have a lot to recommend it: four hours of hallucinations while staring at the wall while sitting in bathtub full of water that is gradually losing all its heat. Not to mention it's was a little hard to come by: it comes from the human pituitary gland*. God only knows how he got hold of it.
The second time I heard of it was yesterday when I got an e-mail from one of my correspondents telling me about her son's struggle with his demons, and she mentions Dr. Abram Hoffer, who became convinced that schizophrenia was caused by people being unable to properly metabolize adrenochrome. Well.
Dr. Hoffer and my father were contemporaries, they were both born around the time of World War 1, and they both died about ten years ago. In an amazing coincidence they both took a left turn in the middle of their careers. After that the comparison breaks down pretty quickly. My father threw over his career as an aerospace engineer to become a farmer. Dr. Hoffer stayed in the medical field, but started developing his theories about how bad nutrition was the root of all evil and good nutrition could cure what ails you. The American Medical Association, predictably, viewed Dr. Hoffer's pronouncements as heresy, and treated the good doctor accordingly.
That's all just so you know that we are not standing on solid ground here. The situation is just a tad flakey.
There are some things that are known, established facts, accepted by the scientific community, like adrenochrome is a metabolite of adrenaline. Normally the body breaks down adrenochrome further into innocuous substances. If for some reason, that doesn't happen, it can produce some truly bizarre hallucinations.
If I have this right (which is debatable) Dr. Hoffer claimed that massive does of niacin can act as a drug and facilitate the breakdown of adrenochrome and so get rid of the nasty hallucinations that are the hallmark of schizophrenia.

Where Dr. Herbert got into trouble is when other people failed to replicate the results of his trials. This doesn't mean he was wrong, it just means he wasn't completely right.
Human biology is so complex that we have just begun to figure out how it works. People get sick for no discernable reason and sometimes they likewise get better. Sometimes a quack cure works. Sometimes it's a coincidence.
It could easily be the case that there are some treatments that have not been proven to work, but do in fact work on some patients. The problem could simply be that no one has yet figured out what the criteria are for determining if a particular patient is a good candidate for a particular treatment. It could be that one doctor has success with his regimen because he subconsciously selects patients that would be good candidates. It doesn't mean his treatment is bogus, it just means he hasn't developed criteria that other people can use to tell if a particular patient is likely to respond to this treatment.
All you can do in a case like this is try it and see if it works for you. You do need to be careful that you don't A. kill the patient with the treatment, or B. spend your way into the poorhouse without effecting a cure.

*my recollection does not jibe with Wikipedia's version. "My memory is good on matters like these", to quote the malfunctioning Thermostellar Bomb #20 from Darkstar.
Posted by Chuck Pergiel at 4:28 AM