My Tundra water pump replacement lasted 8,000 miles then mysteriously supernaturally started dripping coolant. Where from, I could not tell....till this weekend I spent Saturday going through the 75 steps to replace the pump again.
I was relieved to find it wasn't my fault, but an excessive flow through the weep hole of fluid meant to cool the water pump shaft bearing.
I have two dark bruises on my chest from leaning over the hood catch all day Saturday...
The weep "hole" is funny, there is a channel but the "hole" is the gasket thickness between pump housing and engine block.


The arrows in these pics show the weep hole in the defective pump.
Otherwise the pump and gasket look/feel fine. 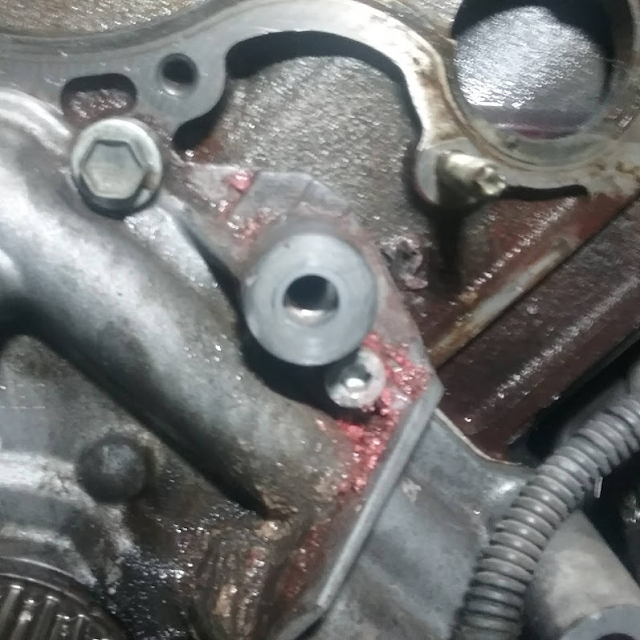 This shows the leakage crud as was deposited behind the Timing belt idler pullley (removed). That is why I could not see where it was leaking fully assembled.

Water pump bearings are sealed. There should be no coolant going through them. None. Any cooling should be done by the circulating coolant. Weep holes are a hold over from the good old days when the seal was a separate item. I am not sure, but I think they were there to indicate the seal had failed and to prevent coolant from getting into the bearing and washing away the grease and so causing the bearing to fail. So if you were alert enough to notice coolant leaking from the weep hole, you could pull the water pump and replace the seal and save the bearing which might prolong the life of the pump for a while.

Aftermarket auto parts are a bit of a crap shoot. New car dealers charge exorbitant amounts for replacement parts, so shade tree mechanics will go for the cheaper versions available from the corner auto parts store. Rebuilding common components like water pumps and alternators can be done in a small shop and usually means replacing some relatively inexpensive parts like bearings, so there is a huge margin available. But some of these rebuilding shops turn out shoddy products, products that might last as long as the warranty, which doesn't bother these guys much, because the car will likely be sold before it fails, and the new owner will replace the failed part again, which means more business for rebuilding shop. But then China got into the act and they started building new replacement parts and selling them for the cost of ones rebuilt in America, which I suspect caused the quality of replacement parts to go up in most places. Except maybe in Texas.

Posted by Chuck Pergiel at 2:17 PM