Santa brought us a Logitech Revue

for Christmas, so we hooked it up and tried it out. It works fine once you plug in the right cables. Well, it works, fine is another matter. I was able to pull up Pergelator: 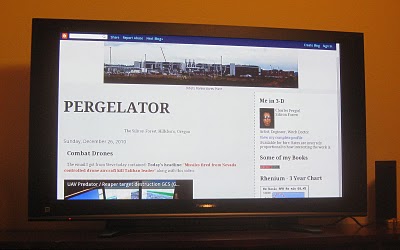 However, we signed up for Netflix, but were unable to watch our selected show (Episode 2 of the first season of Dexter). Further, when we tried watching it via a free web site, it kept stalling. So what's going on? And then it occurs to me that perhaps people bought a zillion of these things for Christmas, and now they are all hooking them up and trying them out and all the servers have gotten jammed up. So I went to check on internet traffic, but I found no anomalies that could explain this behavior. Of course, just because most of the traffic is flowing smoothly doesn't mean that the server farm I am trying to access is not totally jammed up.

And even if I could determine that the problem was with the Netflix servers, I expect they would deny it. I'll try again tomorrow.