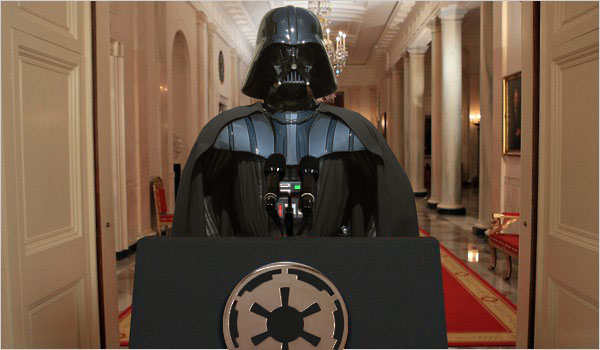 CORUSCANT — Obi-Wan Kenobi, the mastermind of some of the most devastating attacks on the Galactic Empire and the most hunted man in the galaxy, was killed in a firefight with Imperial forces near Alderaan, Darth Vader announced on Sunday.

In a late-night appearance in the East Room of the Imperial Palace, Lord Vader declared that “justice has been done” as he disclosed that agents of the Imperial Army and stormtroopers of the 501st Legion had finally cornered Kenobi, one of the leaders of the Jedi rebellion, who had eluded the Empire for nearly two decades. Imperial officials said Kenobi resisted and was cut down by Lord Vader's own lightsaber. He was later dumped out of an airlock.

The news touched off an extraordinary outpouring of emotion as crowds gathered in the Senate District and outside the Imperial Palace, waving imperial flags, cheering, shouting, laughing and chanting, “Hail to the Emperor! Hail Lord Vader!” In the alien protection zone, crowds sang “The Ten Thousand Year Empire.” Throughout the Sah'c district, airspeeder drivers honked horns deep into the night.

“For over two decades, Kenobi has been the Jedi rebellion’s leader and symbol,” the Lord of the Sith said in a statement broadcast across the galaxy via HoloNet. “The death of Kenobi marks the most significant achievement to date in our empire’s effort to defeat the rebel alliance. But his death does not mark the end of our effort. There’s no doubt that the rebellion will continue to pursue attacks against us. We must and we will remain vigilant at home and abroad.”

Obi-Wan Kenobi ’s demise is a defining moment in the stormtrooper-led fight against terrorism, a symbolic stroke affirming the relentlessness of the pursuit of those who turned against the Empire at the end of the Clone Wars. What remains to be seen, however, is whether it galvanizes Kenobi’s followers by turning him into a martyr or serves as a turning of the page in the war against the Rebel Alliance and gives further impetus to Emperor Palpatine to step up Stormtrooper recruitment.

In an earlier statement issued to the press, Kenobi boasted that striking him down could make him "more powerful than you could possibly imagine."

How much his death will affect the rebel alliance itself remains unclear. For years, as they failed to find him, Imperial leaders have said that he was more symbolically important than operationally significant because he was on the run and hindered in any meaningful leadership role. Yet he remained the most potent face of terrorism in the Empire, and some of those who played down his role in recent years nonetheless celebrated his death.

Given Kenobi’s status among radicals, the Imperial Galactic government braced for possible retaliation. A Grand Moff of the Imperial Starfleet said late Sunday that military bases in the core worlds and around the galaxy were ordered to a higher state of readiness. The Imperial Security Bureau issued a galactic travel warning, urging citizens in volatile areas “to limit their travel outside of their local star systems and avoid mass gatherings and demonstrations.”

The strike could deepen tensions within the Outer Rim, which has periodically bristled at Imperial counterterrorism efforts even as Kenobi evidently found safe refuge it its territories for nearly two decades. Since taking over as Supreme Commander of the Imperial Navy, Lord Vader has ordered significantly more strikes on suspected terrorist targets in the Outer Rim, stirring public anger there and leading to increased criminal activity.

When the end came for Kenobi, he was found not in the remote uncharted areas of Wild Space and the Unknown Regions, where he has long been presumed to be sheltered, but in a massive compound about an hour’s drive west from the Tatooine capital of Bestine. He had been living under the alias "Ben" Kenobi for some time.

The compound, only about 50 miles from the base of operations for the Imperial Storm Squadron, is at the end of a narrow dirt road and is roughly eight times larger than other homes in the area, which were largely occupied by Tusken Raiders. When Imperial operatives converged on the planet on Saturday, following up on recent intelligence, two local moisture farmers “resisted the assault force” and were killed in the middle of an intense gun battle, a senior Stormtrooper said, but details were still sketchy early Monday morning.

A representative of the Imperial Starfleet said that military and intelligence officials first learned last summer that a “high-value target” was hiding somewhere on the desert world and began working on a plan for going in to get him. Beginning in March, Lord Vader worked closely with a series of several different Admirals serving onboard the Death Star to go over plans for the operation, and on Friday morning gave the final order for members of the 501st Legion (known commonly as "Vader's Fist") to strike.

Kenobi and a group of his followers were eventually captured while fleeing the system, and taken aboard the Death Star, which was in the midst of surveying the recent environmental disaster on Alderaan. Darth Vader called it a “targeted operation,” although officials said four tie fighters were lost because of "mechanical failures" and had to be destroyed to keep them from falling into hostile hands.

In addition to Kenobi, two men and one wookiee were killed, one believed to be his young apprentice and the other two his couriers, according to an admiral who briefed reporters under Imperial ground rules forbidding further identification. A woman was killed when she was used as a shield by a male combatant, the Admiral said. Two droids were also reported missing.

“No Stormtroopers were seriously harmed,” Lord Vader said. “They took care to avoid civilian casualties. After a firefight, I defeated my former master and took custody of his body.” Jedi tradition requires burial within 24 hours, but by doing it in deep space, Imperial authorities presumably were trying to avoid creating a shrine for his followers.

Lord Vader has denied requests to present photographs of the body, describing them as "too gruesome" for the general public.