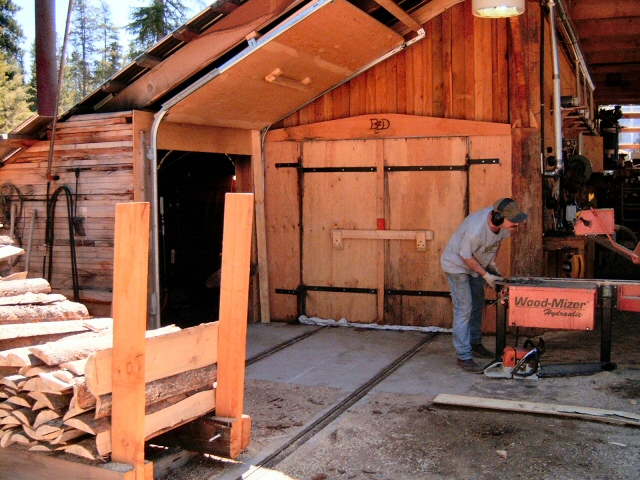 I'm reading about kiln drying on Wikipedia and they give the density of wood in kilograms per cubic meter, which means nothing to me (or at least I pretend that it means nothing). I want my measurements in good old 'Merican standard: feet and pounds. Well Google does conversions, so I pick a big round number in the middle of the range, hand it to Google and I get back:

That doesn't look right. Three hundredths of a pound? That's like half an ounce. Even lightweight balsa wood weighs more than that. So I put the calculation in a spreadsheet and I get 62.3 pounds per cubic foot. That's more like it.
Wait a minute, that's like the density of water (a pint's a pound the world around, eight pints to a gallon, that's eight pounds, and roughly eight gallons a cubic foot, which comes to 64, which is pretty close to 62.3.
One cc (cubic centimeter) of water weighs one gram. There are a hundred centimeters in a meter, and 100 times 100 times 100 is one million cc's per cubic meter, or 1,000,000 grams, which is one thousand kilograms. So wood has about the same density as water.
So how does wood float? Well, density of wood ranges from 350 (kg / m3) to 1250 (kg /m3), so some of it is less dense than water and does float and some of it is denser than water and doesn't. They used to send logs from pine and fir trees to the mill via the rivers, so softwoods float. I remember being out at a fresh water marina where they had some floating logs tied to the dock to act as fenders, and they were barely breaking the surface. And then there are those stories about old logs being reclaimed from the bottom of lakes and rivers where they have been sitting for a hundred years or so and are perfectly preserved. They didn't float.
I was going to complain to Google about their erroneous conversion, but navigating their help maze to get to the point where you can actually say something required more effort than I wanted to spend. Especially since I can make a blog post about it and make Google look dumb. Unless I made an error and I end up with egg on my face.

Posted by Chuck Pergiel at 6:51 PM