Forest Fire Season is in full swing. Scott sent me this clip taken from the cockpit of a water bomber as they are making a drop. See all those clouds along the left hand side? They aren't clouds, Bucky.
Jack tried to drive to Missoula Montana this weekend but couldn't get through because of a fire. First the fire had closed the highway, then he needed gas and the fire had cut off the electric power to the nearby gas station, so getting gas meant backtracking 85 miles. He could have gotten through but it would have meant going 300 miles out his way. 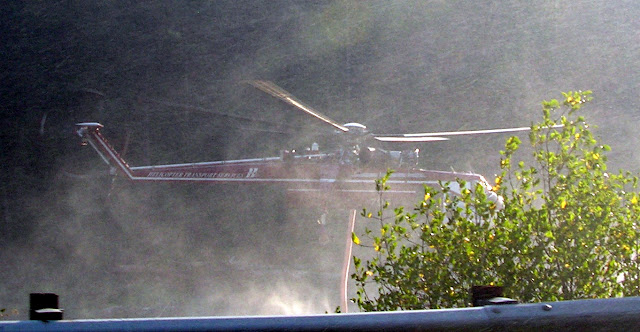 He did get to see Goliath, the giant Sikorsky Skycrane, sucking up water out of a creek.

Looking around for more info I came across Global Incident Map dot com, which lets you choose from a dozen different kinds of disasters to plot for your amusement. Some of them only cover the USA while others are in fact Global. Here's a portion of the Forest Fire Map. As you can see, except for one in Eastern Canada, they are all in the West.

Every year we have a boat load of forest fires, and every year our fire fighting resources are strained to the limit. You can be pretty sure that forest fires have been happening all along and that our attempts to fight them is a recent development. I mean we weren't fighting them before we were here. Some fires might be started by humans, but most are started by lightning. We aren't helping matters by fighting fires. All that does is preserve fuel so the next fire can be even bigger. This seems like a fairly straight forward problem. Why are we continuing to have so much trouble with it? Congressman DeFazio from Southwestern Oregon has a few choice words in a story in The Coos Bay World.