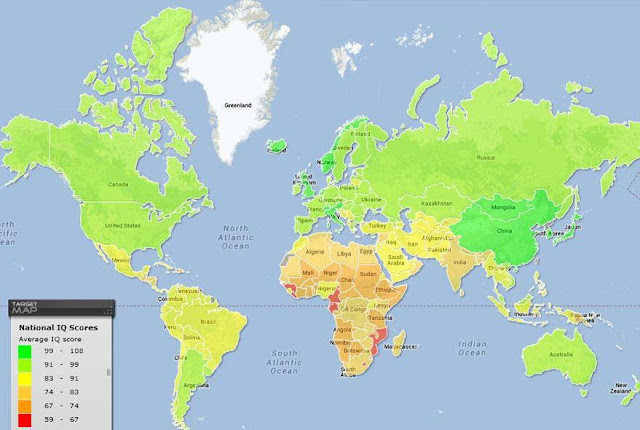 I like the way Central Africa and the Middle East are portrayed as being stupid. We can use that to explain why there is so much senseless violence there. Except that I am not sure there is any correlation between how smart you are and whether you are a good person or not. There are plenty of smart people who are ruthless shits, and plenty of dummies who are just the nicest people in the world.

Then we have this story from Duncan, Oklahoma, about some useless black teenagers killing a wonderful white man. Wait a minute, there are black people in Oklahoma? I thought Oklahoma was all white, like Oregon. You might wonder what makes the white man so wonderful. He was from Australia, duh. Duncan, Oklahoma, is a small town (about 23,000 people) down near the Texas border, about fifty miles Northeast of Wichita Falls. Blacks are a distinct minority, about 1% which means less than 250 persons. You think being black in the middle of some of the reddest redneck country in the US might warp your mind a little? I think it did.

Actually, I don't think I'm racist, I hate most everybody the same. Might hate white people more because that's what I get to deal with. Aren't any black people around here. Okay, I saw one once. I had to remember not to stare.

The best phrase I ever heard regarding race relations comes from Guess Who's Coming To Dinner: "You know what NAACP stands for? Niggers ain't always colored people." Could not find that quote anywhere on the net. I remember the scene distinctly: somebody dumped a tureen of soup over the head of someone else sitting at the dinner table. Do not remember the characters exactly.

My kids give me grief whenever I use the word "nigger", which I often use when I am driving. But I don't discriminate on the basis of skin color, I apply it to the useless drivers I encounter, which is pretty much all of them. To make up for this apparent racist remark I try and alternate with "honky", but it just doesn't have the same bite. "Jackass" might have similar bite, but it doesn't have a color associated with it. Too bad.

Posted by Chuck Pergiel at 1:49 PM

IQ is tied to lots of things. Good childhood nutrition is one of them. So's mental stimulation as a baby.

SAT results often get trotted out for this purpose in the US, also, while forgetting that the SAT verbal is heavy on analogies, such as "Bird is to Flock as _____ is to Regatta," which might play better at some socioeconomic levels than others.

Also, a closer look at the three OK suspects shows a veritable Rainbow Coalition of scumbaggery...

Why are the red states not shown on the US region of the map? ;-)

The map seems to say the smartest people in the world live in China. Maybe smart isn't everything.

Rainbow coalition: Dad gum it. I don't want to look any closer. I want my stereotypes pure, unadulterated by any so called facts.

Red states: we fought a civil war over this and one of the results is that we are all dumped in the same pot.

China is working on a jet engine. Things are gonna get scary when they get that sorted.