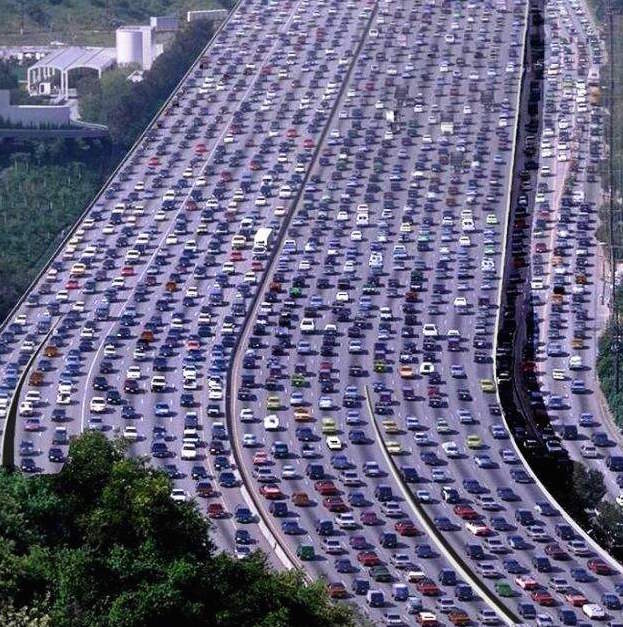 
There are now 254 millions cars currently roadworthy/licensed in the U.S, more than twice what there were in 1980. Compared to 1990 193 million, so 25% more than that now.
There are 4 million miles of roads, only a small percentage greater than in 1990. Presumably it was not that much less in 1980  also. There was no big boom in roadbuilding since then, not like there was after ww2.
http://www.rita.dot.gov/bts/sites/rita.dot.gov.bts/files/publications/national_transportation_statistics/index.html
Additionally the average annual mileage in that same time is up 25% or more, so the effective loading is even greater. Only airbags and people's financial fear of insurance hikes keep deaths at acceptable minimums, statistically. The costs continue to rise, to the point that owning a late model a car is now  as expensive as feeding a family of four. Of course you cannot make the money if you don't have a car.
In grad school I took a computer simulation class. Inherent in those studies is "queueing theory" which is useful in calculating the number of cash register that should be staffed at a given time, to balance the need for service against the store operators desire to keep you in the store shopping for more goods. If they reduce the number of open registers too much, people will abandon their carts or avoid returning to that store due to slowness. If they overstaff registers (punch presses, welding stations, call center seats, etc,) the business is not only overpaying for idle workers or equipment, but also expediting purchasers exits from the store. Thing have less value if you do not wait at all for them, and can go without if the wait is too long.
Traffic is another application for queueing theory, which gets extremely mathematically complex, using Poisson distributions to predict system requests, load, and abandonment. It's not even close to easily understood, in fact better to look at it as only a possible mathematical framework for generally random and emotional behavior. In practical terms, I think it's easier to identify the workable niches in a system than attempt to collect data and create a convincing mathematical argument. Most of us live/work in far too small a sample.
The thing about traffic, is that there is no abandonment. When a person gets into a car, do they ever say, "oh traffic is too heavy" and turn around and go home? No. They sit there. They have to. This breeds psychotic behavior and the commensurate tragedies. I see expensive car damage accidents on open one-way roads almost everyday in my commute, especially now that the weather has changed and people are newly confident that their car will withstand another day of high-speed abuse because they were too tired to get out of bed on time. They blame the roads, the other drivers, the speed limits, anything but the sad fact that they are there, pushing the lambda to 1, exceeding the threshold of capacity until the pot boils over into the ditch, either figuratively with money or a dented fender. The same thing really.

P.S. Queuing Models: The Mathematics of Waiting Lines, a video / slide show with a version of "Money For Nothing" by Ghost Town Trio. The video is sort of meh, but the tune is interesting.

P.P.S. There are about a thousand cars in the picture. What would 250 million cars look like? It would look like a highway that was 1,000 lanes wide running from New York to Los Angeles. Fortunately, most of the cars are confined to LA and Bos-Wash, where people spend a thousand hours a year in their cars instead of a more normal 500.
Posted by Chuck Pergiel at 7:56 AM

Email ThisBlogThis!Share to TwitterShare to FacebookShare to Pinterest
Labels: Uniberp