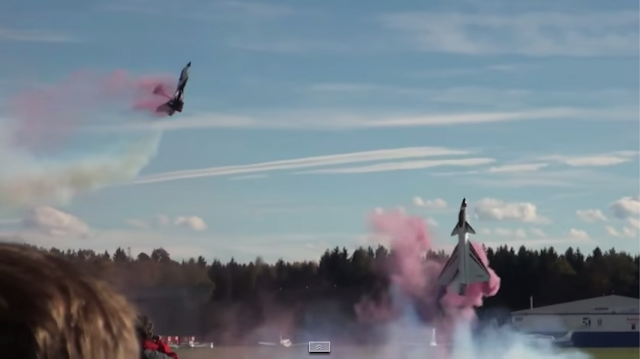 Military jet fighter aircraft can go straight up. Usually they do it by transitioning from horizontal flight, in which case they are hundreds if not thousands of feet in the air. By modulating their power they can slow to a stop and and appear motionless, standing on their tail high above the ground, at least for a few seconds until the instability of their situation caused them to fall away to the side.
But here we've got these Russian jets standing on their tails just a few feet from the ground. This is just one of a number of stunts that shouldn't be done with an airplane. You can see the video here.
We (the USA) has spent hundreds of billions of dollars (some people claim it is a trillion) developing the F-35, which may end up being a complete bust. Well, maybe not a complete bust, just not a contender in the dog-fight arena, which may or may not be important in the future. Mostly we seem to use aircraft these days to destroy ground forces, but most any military aircraft can be used for that purpose.

It's no surprise that the F-35 is not as maneuverable as the F-16 since it is carrying that great big vertical lift fan in the forward part of the fuselage. I don't care what you make it out of, it's got to be heavy, and it has to be big or it couldn't do its job. And this is all so it can take off and land vertically.

The Harrier succeeded because it wasn't carrying a great deal of extra baggage, it just had nozzles that could direct the exhaust stream down or to the rear, depending on which way you wanted to go.

Many moons ago, Convair developed a propeller driven vertical take off fighter. It worked, but it wasn't a big success, mostly because landing seemed to be a bit of a trick. Seems to me that we should be able to overcome this difficulty, especially with all we've learned in the intervening 50 odd years.

Other posts about VTOL aircraft.

Email ThisBlogThis!Share to TwitterShare to FacebookShare to Pinterest
Labels: Aircraft

You can learn a lot by following the instructions that come with the plane, but most people find that there exists Jets. Radio Controlled Planes far more valuable information about how to fly remote handled airplanes by going online.