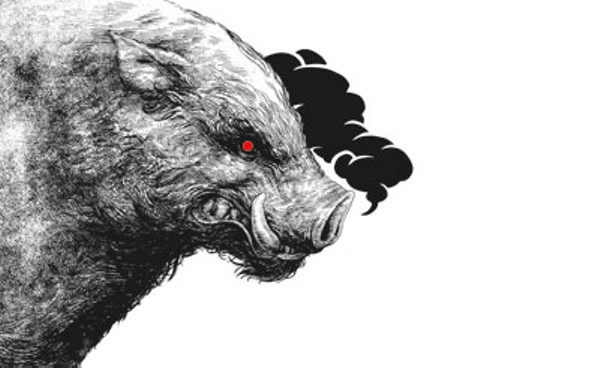 The New Yorker has a fine, old (2005), story about hogs and how wonderful they are (not). At what point do you declare a nuisance to be a serious problem? However you look at it, the 'problem' is getting worse.

And then we have this bizarre phenomena:


As I leaned over the map and studied it with Joe Corn, suddenly my attention swerved. This map, with its intricate little counties and occasional whole states shaded green to highlight the potential disease-vector threat of wild hogs, reminded me of the red state—blue state map of America. At first glance, the states that voted for George Bush in 2004 and the states marked on this map as having feral hogs seemed to be one and the same. I mentioned this oddity to Joe Corn, who, scientist-like, declined to comment beyond the area of his expertise.

Afterward, I could not get this strange correspondence out of my mind. I compiled ’04 red state—blue state data and matched it with SCWDS hog-population information on the map of that year. I found my first impression to be essentially correct. The presence of feral hogs in a state is a strong indicator of its support for Bush in ’04. Twenty-three of the twenty-eight states with feral hogs voted for Bush. That’s more than four-fifths; states that went for Kerry, by contrast, were feral-hog states less than a fifth of the time.

Posted by Chuck Pergiel at 1:40 PM