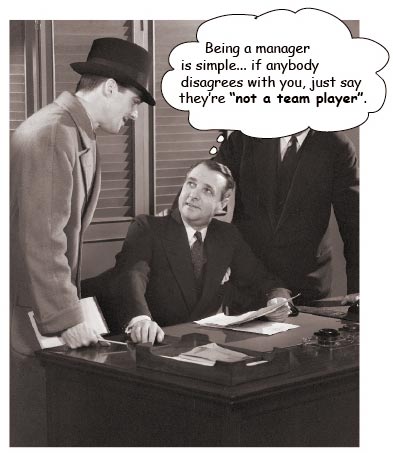 I have been out of a job for almost a year now and I am supposed to be looking for work. I'm not doing a very good job of it. This is at least partly because the phrase "team player" leaves a bad taste in my mouth. Intel Corporation is the biggest employer in Washington County (Oregon) where I live and they pay very well. It can be a really great place to work, or absolutely horrible. I have heard it both ways. Some people think their job at Intel is just great. Others think the pointy haired boss in Dilbert would be an improvement. I think the deciding factor is the manager you work for and the people you work with. A good manager can make your job a joy. Unfortunately, they seem to be few and far between. Working with people you can get along with will make your job tolerable.

There was a rumor floating around a couple of years ago that the "Egyptian Mafia" had taken over Intel's Ronler Acres plant. Some smart guy from Cornell had gotten a position there and had proceeded to fill his staff with family and friends, and whoa be unto he who crossed him up. You could end up with a bad performance review and a boot out the door.

Intel had a bunch of layoffs last year, but it looks like they are hiring again, and they are even hiring firmware engineers, which is what I claim to be. I have been knocking around in the computer business for pert near 30 years now. If I had played my cards right, I might be sitting on a fortune and not even thinking about a job. Unfortunately, I did not even know there was a game going on. I was busy building houses of cards (elaborate castles even) but everyone else was betting on which way the cards would land when the house collapsed. So I am back to looking for a job.

The problem with the term "team player" is that in the world of corporate double-speak, it can mean whatever you want it to mean. In sports, a team player is someone who works with his team to win the game. If it means helping other players score instead of attempting to score himself, he does. If the coach says sit on the bench, he sits on the bench.

In sports the goal and the rules on how to get there are pretty clear. In the business world, nothing is clear. Being a "team player" may mean doing whatever will make your boss look good so he will get a bonus. It may mean covering up some kind of foul-up so your team, or boss, does not get blamed, and even better some other team catches heck. There are no referees in business, at least not at this level. So the term "team player" has gotten a bad reputation, and any time I see it in a want ad, I am repelled. Looking around for images to go with this story, I stumbled across this list of suggestions of how to deal with a "Pointy Haired Boss":

In summary:
Computer systems really are like houses of cards. Any little glitch can cause the whole thing to come tumbling down, and I do mean little. Features on microchips are down towards the nanometer level now. We will be starting to count atoms per transistor pretty soon. Visible light is too coarse to be used for drawing features on silicon wafers. The industry is moving towards ultra-violet. My neighbor got a PhD in this subject. He flies around the world talking to people about making masks to use with ultra-violet light. Seems it's a bit of a trick. It keeps him very busy.

I have thought about going back to school to study quantum computing, but I would have to fill out forms. I don't know if I am really ready to do this or not.

Meanwhile, a nice job writing code for some kind of black box would suit me just fine. All I have to do is get after it.

It just occurred to me after writing all this that if a manager includes the phrase "team player" in a want-ad, he probably has his priorities screwed up: politics over engineering and I probably don't want to work for him. If there were a shortage of jobs, I would not be able to be so picky, but this week there are a dozen open positions.

Email ThisBlogThis!Share to TwitterShare to FacebookShare to Pinterest
Labels: Work