Marc was in Santa Clara earlier this month using a laser interferometer to measure how much an inductor jumped when a surge of current went through it. The inductor, probably just a U shaped piece of wire, is part of high power graphics card for a PC. When the card is running at full bore there can be 100 amps of current running through the inductor. If the amount of current is constantly changing, the inductor will be constantly flexing, in fact vibrating. When playing some games that use complex graphics, the inductor will vibrate enough to make noise, in some cases loud enough to be annoying. During one test the inductor was so loud he had to wear sound absorbing headphones to protect his hearing.

Here's a video that doesn't do a half bad job of explaining what an interferometer is and how it works. I looked at a dozen or so others. They were all much worse. They were either in German, had loud bass thumping music, or didn't show much of anything.


You can get power supplies for PC's that will deliver 1800 watts. With no losses, that is going to require 15 amps from your 120 VAC wall outlet. The graphics card uses the 12 volts from the PC's power supply and converts it to one volt for use on the board. 100 amps at one volt is 100 watts, which is as much power as it takes to run an ordinary household incandescent electric light bulb. 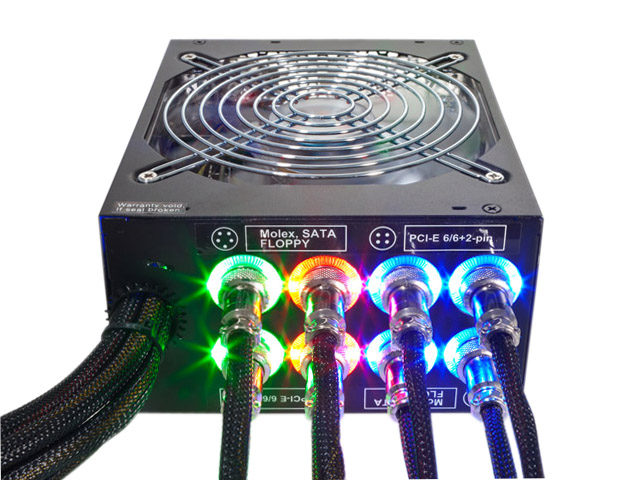 The graphics card board itself will flex with changes in current. At times it can look like the ocean with waves moving. Couldn't find a video of that, but I did find this one, so it will just have to do.

Update December 2014: Stu just put up a post about a Lego interferometer, and I remembered this one. When I checked I found the picture of the power supply had vanished (wretched Blogger) and the video I had embedded no longer played. I had used a Romanian (?!?) site for this tune, but it quit working. The video is still there, but the user is gone. The link gets translated to this one, here just in case we ever want to return to Romania.
Posted by Chuck Pergiel at 3:21 PM

So that is what I'm hearing when I play Sims? I thought it was the cooling fan. I know so little about what's inside my computer, in fact upgrading my vid card and RAM is about the extent of my "interior" knowledge. Hopefully, reading more of your blog will educate me a bit.

Thanks for the information (put in a way that I actually understood it!).