Folk Tale of the Day

According to local folklore, Muckle Flugga and nearby Out Stack were formed when two giants, Herma and Saxa, fell in love with the same mermaid. They fought over her by throwing large rocks at each other, one of which became Muckle Flugga. To get rid of them, the mermaid offered to marry whichever one would follow her to the North Pole. They both followed her and drowned, as neither could swim. - Wikipedia article on Muckle Flugga.

I just do not know what to say about this. Via Roberta X

Looking at Google's satellite image, since that's the kind of guy I am, I see a new block-edged pattern being used on the coastline. 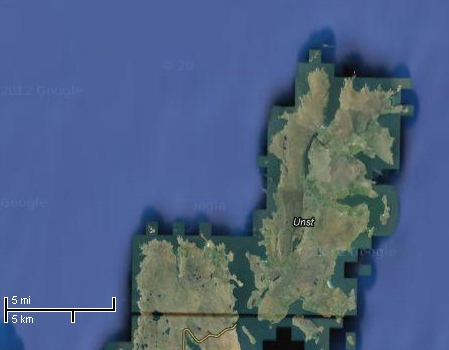 Muckle Flugga is the small splotch in the topmost block, just off the Northern shore of Unst.

Also Muckle Flugga is about 200 miles due West of Bergen, Norway.