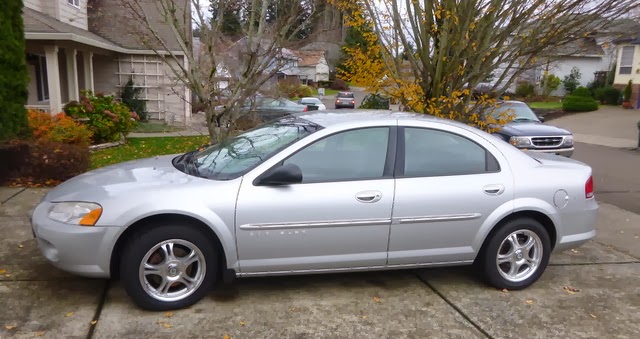 Our 2001 Chrysler Sebring is dead again. It had been sitting in the garage for two years waiting for someone to work on it. A few weeks (months?) ago we managed to gather the necessary motivation and started work. It took us about a month to pull the engine (pull the car off the engine), R & R (remove and replace) the head gaskets, and put it back in the car. Actual time spent working on this project was maybe 20-24 hours, but for some reason it felt like a friggin' ordeal. It might be because I am old, or out of shape, or not used to working on cars. Whatever, it was a mighty struggle but we persevered and eventually got it put back together, put a battery charger on the two-year-old battery overnight and the next day it fired right up. Cool. Finish putting the bodywork back together, drop it down off the jackstands and we should be good to go, right? Wrong. Now when I fire it up there is someone banging on the inside of engine with hammer. That's not good.
But you know, it might be the timing chain. I had an old Toyota once upon a time that would make that same exact noise when the chain got old. It would stretch so much that the tensioner would not be able to take up all the slack and it would slap against the side of the case. It sounded just like a rod knocking. The Sebring also has a chain and a chain tensioner, and maybe the tensioner isn't working properly. I'll drive it over to Eric's and see what he thinks, so I put it in gear and press on the gas and we start moving, but not very fast. The engine has like no power. I could stand the banging if we had some power, at least we could get up to speed and coast most of the way, but going like this the engine will hammer itself to bits long before I get there.
Right. So the Sebring is dead again. 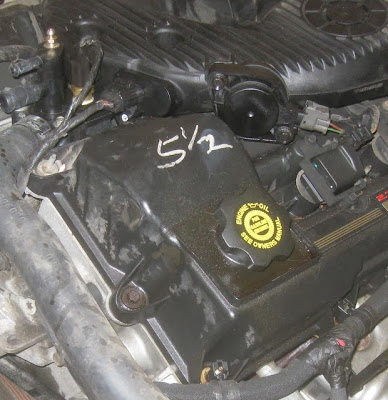 I suspect that this whole disaster started because someone did not properly bleed the cooling system when they changed the anti-freeze. It's supposed to get long life anti-freeze (the orange stuff) because it's an aluminum engine and all. They would have been better off to just leave it and not do the prescribed maintenance rather than botch it like they did. My first clue should have been when my wife drove it back from Iowa and the heater wasn't working. My second clue should have been when I opened the hood and saw that someone had written "5½" on the valve cover. It looked suspiciously like a junkyard marking, meaning the engine had probably been replaced once already. 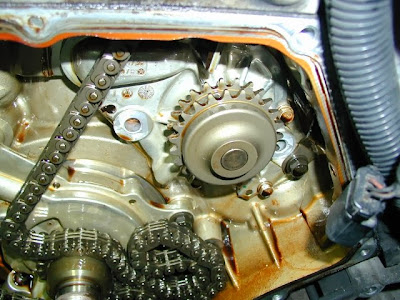 Inside the timing cover of somebody else's nice clean engine. 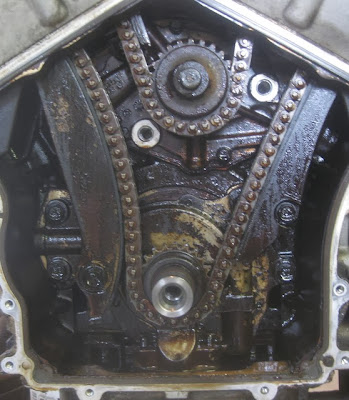 Inside the timing cover of my engine.

My third clue was when we opened up the engine the first time and found that the insides were stained dark brown and black. Looking at pictures on the internet of other people working on this engine I notice that the insides of their engines are all bright and shiny clean, which is how a well maintained aluminum engine should look, but I am used to working on old, beat to death, cast iron engines, which never were shiny silver inside. Add ten years of the engine working like a dog and various shades of black are what you should to expect.
My fourth clue was when we took the heads off the second time and found ABSOLUTELY nothing wrong with the head gaskets. Well, it didn't spray oil all over the engine compartment this time, so that should have been another clue.
The only other thing was that we replaced the crank and cam position sensors while we had the engine out. Much easier to do this when the engine is out of the car, and at this point what's another $100? Might be why it failed two years ago and might be why it started right up this time, though it would be a heck of a coincidence to have rod bearing shell AND a sensor to fail at exactly the same time, or near enough to make no never mind.
So now what? The car, except for the engine is still in fine condition, it only has 60,000 miles on it. What am I going to do with it? A junkyard might give me $300 for it. Everyone in my family is sick to death of it. I seriously doubt whether I could summon the motivation to attempt an R & R of the engine a third time, though I should be getting good at it by now .... no, don't even start thinking that. A used engine can be had from a junkyard for around $1500, and Eric tells me it's a 14 hour job to R & R the engine, for which he would charge $1200. So for less than three grand I could be back where I started, which is a running car with a dubious future.
On the other hand I could attempt to repair this engine, but that is likely to be at least as expensive as buying a used engine. Just buying the gasket sets and head bolts this time cost over $300. I was just working on the top end, now we'd be working on the bottom end which means crank and rod bearings and possibly a new crank and rods, and those would definitely be expensive. So far I've sunk somewhere between two and three thousand dollars into this project for a car that might be worth five or six thousand. So I'm on the horns of a dilemma. Do I throw in the towel and sell it for parts, or do I gird my loins and venture once more into the breach?
This whole episode did have the side benefit of running both of my boys through the Pergelator's Longneck school of auto repair. Whether this will give them confidence to undertake their own quixotic repair quests or cause them to stay very far away from auto repair remains to be seen.
Eric's estimate of the time for him to do the job made me feel a little better about our performance. the fourteen hours he quoted is just to R & R the engine, nothing about doing any work on the engine once it is out. So 20 hours for us to do the job in our garage with only hand tools, a floor jack and an engine hoist is not too bad. There were two of us, but then we spent a lot of time looking for tools. It could be done without an engine hoist, but the hoist does make it easier. 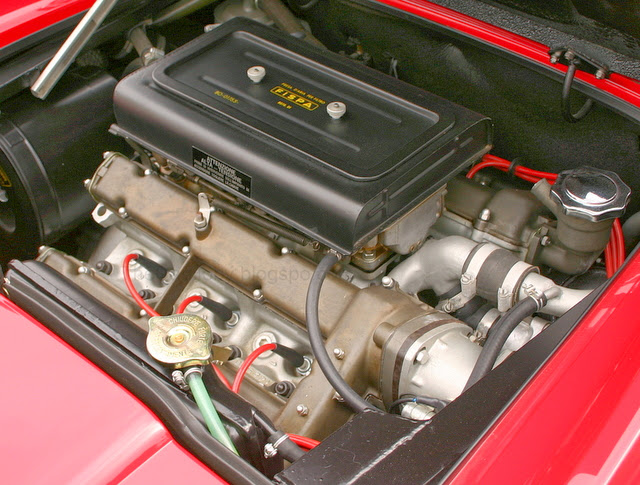 The one piece to this story that I haven't mentioned (at least I don't think I have), is just how exotic this engine is. It's an all aluminum, DOHC (Dual Overhead Camshafts) 24 valve V6. When I was a kid and muscle cars with their pushrod-operated, cast-iron, V8's were all the rage, the only place you would have found an engine like this would have have been in something truly exotic, like a Ferrari Dino, and oh! how I lusted after a Ferrari in those days. Now it's just one of a zillion very similar engines, and no one even appreciates how special they are. DOHC and 4 valves per cylinder are just a couple of bullet points on the marketing brochure, and they might just be one bullet point. I, too, have become somewhat less impressed. Used to be when I did any kind of engine work I always cleaned all the parts both inside and out. Now I just make sure I set them down with the gasket surfaces facing up so they don't pickup any extra dirt. I still clean the gasket surfaces, but that's about it. Shoot, this time I didn't even drain the oil.
Posted by Chuck Pergiel at 2:01 PM

DANG! That is one clean engine! Your car should run forever now.