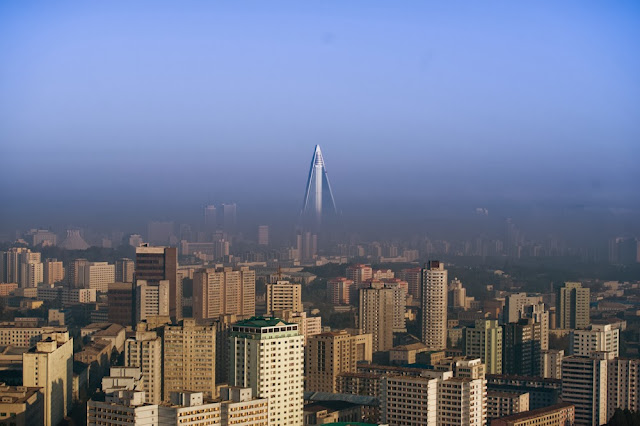 That triangle in the background, apparently floating in the sky, is the Ryugyong Hotel in Pyongyang, North Korea
Jim Oberg got me started on this one as well. He put together a file about his 2012 visit to North Korea to witness a rocket launch  His introduction includes a picture of this hotel along with this bit of text:

Dominating the Pyongyang skyline & visible from a dozen miles outside the city is a giant futuristic building that NOBODY talks about, even as a joke or a curse. They just don’t SEE it.

Okay, that's weird, but this is North Korea, so understandable. But now my curiousity is piqued, so I go looking for more info. Seems the building has been under construction for a while, and some people have been making fun of it. Some other people are trying to finish it and put it into operation. We shall see how that goes. In that vein I found this description by Simon Parry, quoted in a story on CNN, more encouraging.

Despite the unfinished interior, Parry describes the hotel as “fantastic from the outside -- it's dazzling, coated in expensive glass tiles.”The juxtaposition of the spaceship-like building with its humble surroundings is dramatic, he adds.
"In the morning and evening the effect of the sun's reflection blazing down over the rest of the city is extraordinary," said Parry.

Posted by Chuck Pergiel at 3:53 PM